The decision was taken after consultation with Cricket Australia (CA) and Hughes' family.

The Premier of the New South Wales (NSW), Mike Baird on Monday cancelled the State Memorial Service for Australian cricketer Phillip Hughes, who passed away last month after being hit on the back of the head by a bouncer in a Sheffield Shield match at Sydney.

An account on Twitter of the Fairfax media said the decision was taken after consultation with Cricket Australia (CA) and Hughes’ family.

As a tribute to Hughes, who recently died after being hit by a Sean Abbott bouncer, Australia have included him  as the 13th man for the first Test match against India at Adelaide. Hughes’ death has shocked and saddened the whole cricket community, especially the Australian team, who seem to be most affected. All the players will also wear Hughes’ No 408 in his memory.

“It’s really special, to make his family and Phil very proud. I’m certainly proud to be able to wear that number,”, Mitchell Johnson was quoted as saying by cricket.com.au. 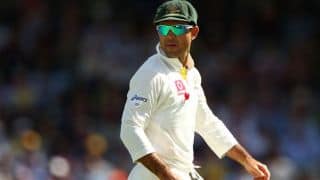