Erapalli Prasanna said that a lighter bat would give a batsman more time to wield the bat.

Paying condolences to Phillip Hughes, who died two days after he was struck on the head during a domestic match in Sydney, Indian spin wizard Erapalli Prasanna today advocated use of lighter bats to negotiate bouncers.

“The answer to negotiate bouncers would be to use lesser weight bats, which will give ample time for batsmen to wield his bat and move their feet in line of the balls, which is very important aspect of good batting,” he told reporters here.

Prasanna said the death of Hughes is unfortunate and it has abruptly ended a promising career of a talented Australian player. “It is really unfortunate. It has put an end to a promising cricketer, the Australians had. It is a terrible loss to the family as well,” he said.

Prasanna opined that the death of Hughes has resulted due to the two-bouncer per over rule which has brought sheer pace into the armoury of fast bowlers.

“In years gone by, when helmets were not around. The great players like Gavaskar, Vijay Manjrekar, Viv Richards and Gary Sobers, they had the technique of moving into the line of the ball and hooking the ball if necessary. That means the technique adopted by them was the best,” he said. 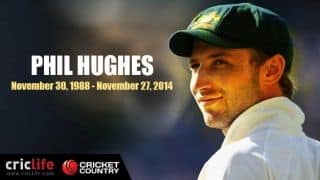