Ian Chappell stated that playing the 1st Australia-India Test would be good for players.

Former Australia cricket team captain Ian Chappell has said that deceased batsman Phillip Hughes would have wanted next week’s first Test against India to be played.

Hughes passed away on Thursday after succumbing to injuries he endured from a bouncer at the Sydney Cricket Ground (SCG) on Tuesday at St Vincent’s Hospital. The 25-year-old South Australian batsman, who was pushing for a Test recall against India in Brisbane next week, was knocked out after the ball made impact under his helmet, behind his left ear.

Chappell also said that playing the Test at the Gabba from December 4 might be the best thing for players mourning Hughes, News.com.au reported.

Cricket Australia (CA) confirmed on Thursday that Hughes had died at St Vincent’s Hospital in Sydney. He didn’t regain consciousness after being hit in the head by a bouncer on Tuesday, while batting for South Australia at the SCG.

As fellow players struggle to come to terms with the 25-year-old’s death, CA faces a big decision on whether to go ahead with the opening Test of the summer.

Four of Australia’s Test squad members, Brad Haddin, David Warner, Shane Watson and Nathan Lyon, were on the field when Hughes was struck, and every member of the 12-man squad is a mate of the 26-Test-old batsman.

Former Test players like Brendon Julian and Damien Martyn have questioned whether the Test should be called off, while 156-Test great Allan Border felt players should be allowed to stand down.

Chappell admitted that it would be hard for the Australian players who kept a bedside vigil with Hughes to focus on playing at the Gabba.

But the former batsman and long-time television commentator believed cancelling the Test would not be what the gritty left-hander would have wanted.

Chappell revealed that in a strange way it would be probably the best thing that they go out to train and play in a game, adding that at least while one is on the field or in the nets one would have something else to concentrate on, because every moment one is off the field one is going to be thinking about Hughes and what happened.

Chappell said that it was the right thing to do to cancel the Sheffield Shield round this week but added that he believes Hughes would want the game to go on. 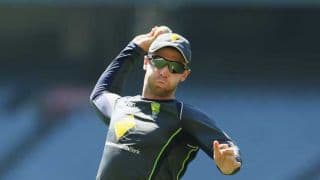