India were bundled out for 455 in the first innings of the second Test at Visakhapatnam against England.

England were stumped with the wicket of skipper Alastair Cook with Indian bowler Mohammed Shami spliting the stump into two in Day Two of the second Test. England opening batsmen Cook and Haseeb Hameed entered with a mindset to score big runs on board. However, Indian bowler had other plans and targeted the England captain, pitching the delivery just on off and cluttering the off-stump, breaking it into two. India were bundled out for 455 with the England spinners bagging maximum wickets on Day Two. Moeen Ali got three in the first session with Adil Rashid gaining the other two to end hosts innings. LIVE Cricket Scorecard: India vs England 2nd Test at Vizag

India might have had a tough time initially with KL Rahul and Murali Vijay’s early wickets, but Virat Kohli and Cheteshwar Pujara’s centuries helped India bounce back and put their side on driver’s seat with their centuries. Kohli raced to his 14th Test ton while Pujara got his 10th Test century. Pujara also got to hos 3,000 Test runs along with Vijay. Kohli, however, missed his double-century as he was dismissed for 167 while Pujara was gone for 119.

Jayant Yadav, who made his debut for India replacing Amit Mishra, also made a decent entry into the Test arena with his 35 runs that included 3 fours. Ravichandran Ashwin also got his half-century and helped India go past the 450-run mark.

England also tried their best on Day One, but it was comeback man James Anderson’s lucky day as he bagged three wickets for 44 runs at the end of the day. On Day Two it was the spinners who bagged maximum wickets. 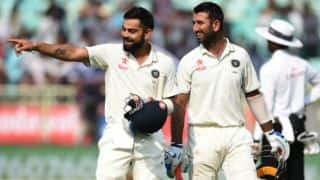 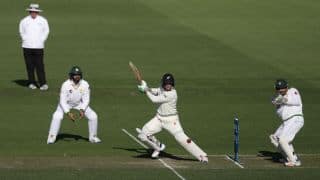