MS Dhoni recently created waves when he uploaded his picture in Rajnikanth style with a caption, “Tried copying the pose of The One and Only THALAIVAR.” Rajnikanth and MS Dhoni share a deep relation with Chennai as Rajinikanth is considered a demigod in Chennai while Dhoni has successfully led the franchise of Chennai in IPL for 3 title wins. Meanwhile, Dhoni awaits the release of director Neeraj Pandey’s biopic on him titled MS Dhoni: The Untold Story. The film stars Sushant Singh Rajput as MS Dhoni, Rajesh Sharma as the Indian captain’s childhood coach, Anupam Kher plays Dhoni’s father while Bhumika Chawla plays Jayanti, Dhoni’s sister. The trailer was launched recently which has clocked more than 15 million views. The film is slated to release on September 30. Full Cricket Scorecard: India vs West Indies, 4th Test match

Tried copying the pose of The One and Only THALAIVAR

In addition to the Hindi version, the makers of the film are going to release it in Tamil too. So naturally this film is bound to make raves in Chennai to and Dhoni will definitely want his film to do same business as Rajinikanth’s Kabali which is doing great business in South even after weeks of the release. This picture was been shared by the Dhoni on Instagram just a day after his film’s Tamil trailer was released. Also read: 5 West Indies cricketers to watch out for

Having lead a successful campaign for Chennai Super Kings in IPL, Dhoni is amongst those few celebrities who share a very deep bond with Chennai. Trying to impersonate the gangster looks of Rajinikanth from Kabali is a very good strategy applied by the film makers, as the film looks set to do a block-buster collections all over India and dubbing the film specially in Tamil version signifies how much Chennai matters to Dhoni. 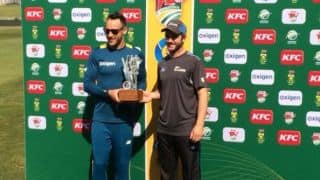