India opener Shikhar Dhawan could not wait for the first Test against Sri Lanka starting on August 12, 2015. He had recently said the “controlled and aggressive” nature of skipper Virat Kohli rubs on the entire team and fires up the players to be more attacking on the field. “He (Kohli) is really controlled and aggressive in the field and that brings an aggressiveness on all the players too and we are also more attacking towards the opponents,” said Dhawan ahead of the upcoming Test series against Sri Lanka. Dhawan and Kohli have been friends for long time and have played Ranji Trophy for Delhi. Asked about their friendship, the left-hander said, “We are still the same and it is not that something has changed. It is good that my captain has expectations from me and I hope I play consistently for my team.” Read: Video: Shikhar Dhawan in indoor batting nets ahead of Sri Lanka series

The calm before the storm! At Galle, Can’t wait to get on the pitch for the 1st test. #IndvsSL pic.twitter.com/XNbscAMOnJ

Asked about competition for the opening slot, Dhawan said, “I think it is a good thing for Indian cricket that there is so much competition for opening slot. Players put in more effort because you can be kicked out if you don’t play well and make mistakes. I take it positively and try to ensure that I give my best.”

Dhawan, who had scored fastest Test ton on debut against Australia in 2013, said it is good to have batsmen who can score runs quickly in modern day Test cricket. “In Test cricket now, you also need players who can score quickly, it has became very important because sometimes in second innings or first innings if you score quickly it helps the team. I have always been like that, so it doesn’t bother me,” he said. READ: Murali Vijay believes good rapport with Shikhar Dhawan helps them in performing better 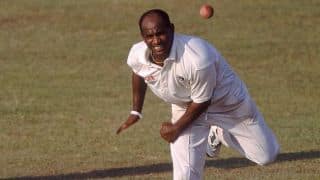