Stuart Binny picked up two wickets in the first innings of the third Test.

India all-rounder Stuart Binny looked on the proceedings during Day Three of the third Tests at Colombo (SSC) from the dressing room, flaunting his tattoo in the right arm. Binny missed out on the first Test at Gallebut has found a place in the second and third Test against Sri Lanka. Binny made handy contribution with the bat in the second innings of the ongoing Test, scoring 49 after getting out for a duck in the first innings. He chipped in with a couple of wickets with the ball as well. India were bowled out for 274 in their second innings, setting a target of 386 for Sri Lanka to chase with just over a day to go. Live Cricket Scorecard: India vs Sri Lanka, 3rd Test at Colombo (SSC)

A dramatic period of play after tea saw India get bowled out for 274, adding 40 runs after tea with Ravichandran Ashwin scoring 58. Sri Lanka will now have to chase a record 386 to win the third Test at Sinhalese Sports Club (SSC), Colombo.. However, the real action came just before the final wicket fell, with Ishant Sharma and Dhammika Prasad being involved in a tense few minutes of play. Dhammika bowled bouncer after bouncer, while Ishant evaded them and taunted him. The clash saw certain Sri Lankan fielders get involved as well, while Ashwin himself had words with the umpire. The tense eight-ball over culminated in Ashwin’s wicket, which was probably for the best. India will feel they have a massive chance of winning the match and thereby winning a series in Sri Lanka for the first time since 1993. Live Cricket Updates: India vs Sri Lanka, 3rd Test, Colombo, Day 4

The series is currently level at 1-1. 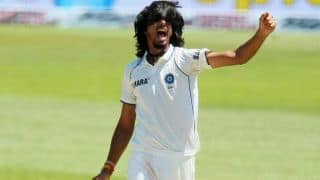