Jab Harry met Sejal might have bombed at the box office but whenever Anushka Sharma meets Virat Kohli, they leave social media ablaze. The latest buzz suggests that the couple is all set to confirm the world about their relationship through a television commercial. At least the theme of the commercial seem that way. Few images shared on social media as well as on Kohli s Instagram stories suggest the two were shooting for a traditional brand. In one of the photos, while Anushka is looking into the camera, Virat has his eyes fixed on her, making it an adorable capture.

OMFG #Virushka shooting for an ad together. I can’t believe this damn I can’t..Thank u god..For a second I thought it was an edit but no it’s not it’s real damn it’s real and Their traditional wear damn they look so adorable and the way Virat is looking at anushka uff I can’t wait for this anymore.. Plz give us this ad soon… #Virushka #Virushkaslays #viratkohli #anushkasharma #followforfollow #followforlikes #followforfollowback #lykforlyks

In the other, the Bollywood beauty looks down shyly and Kohli s eyes seems to be stuck on his lady love like forever. The ad shoot took place in Mumbai and one can only gush looking at the photos. Kohli is already part of an ethnic-wear brand, Manyavar. But this is not the first time Anushka and Kohli are seen in a commercial together. Remember, the Clear Shampoo tango ad?

That commercial was the beginning of the tale of love between the two. While Kohli has always been open about his relationship be it proclaiming his love openly during Valentine s Day or walking hand-in-hand with Anushka in Bollywood parties.

Anushka, earlier, was hesitant to accept her relationship openly. However, if we date back to the #BreaktheBeard challenge, Anushka had warned the Indian skipper from removing his beard. The rumours about their break-up were put to silent with that one #awwdorable comment from Anushka.

It is about time we say, can the two declare their love? 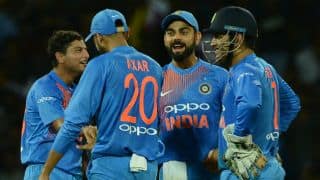