While many were anticipating James Anderson s 500 wickets, it was Ben Stokes who stole the cake with Test-best figures as his 6-wicket haul gave a dramatic start to the third and final Test.

While many were anticipating James Anderson s 500 wickets, it was Ben Stokes who stole the cake with Test-best figures as his 6-wicket haul gave a dramatic start to the third and final Test. Anderson, who began the third Test on 497 wickets, did bag 2 wickets and moved closer to his personal milestone. But instead, it was all-rounder Stokes who then did the most damage as West Indies were shot out for 123. England in response to West Indies 123, slumped to 46 for 4 in reply a deficit of 77 runs before bad light eventually ended play for the day to leave the match intriguingly poised with the series all square at 1-1.

West Indies captain Jason Holder starred in a dramatic fightback. Dawid Malan and Ben Stokes were both 13 not out after towering paceman Holder had taken two for 18 in six overs. It seemed England, who will hope their middle and lower order batting again bails them out of trouble on Friday, would have the upper hand when Stokes returned Test-best figures of six for 26 in 14.3 unchanged overs either side of tea. There were times when Stokes, swinging the ball at sharp pace, was all but unplayable. England rapidly declined to 24 for four in a match that would surely have been halted a lot earlier for bad light before the advent of floodlights at Lord’s.

Openers Mark Stoneman and Alastair Cook were both caught behind off Kemar Roach. Tom Westley then saw his prospects of an Ashes tour place fade when he was plumb lbw to Holder for eight, his fifth successive single-figure score in Test cricket. Malan, on his Middlesex home ground, survived the hat-trick.

Earlier, Stokes’s figures surpassed his previous Test-best of six for 36 against Australia at Trent Bridge in 2015. 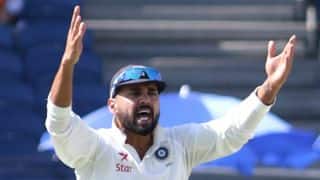 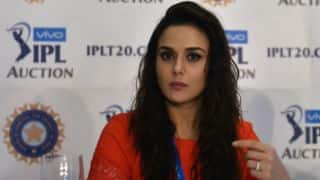