Kevin Pietersen missed out on his first Test century in Britain for nearly three years after helping England gain a first innings lead in the third and final Test against Sri Lanka. England were 195 for four in reply to Sri Lanka's 184, a lead of 11 runs, at stumps on the third day of the Rose Bowl's debut Test here Saturday. 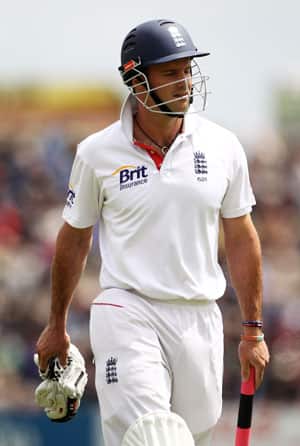 Kevin Pietersen missed out on his first Test century in Britain for nearly three years after helping England gain a first innings lead in the third and final Test against Sri Lanka.

England were 195 for four in reply to Sri Lanka’s 184, a lead of 11 runs, at stumps on the third day of the Rose Bowl’s debut Test here Saturday.

Pietersen exited for 85, eight minutes before the scheduled close, when he edged a drive to wicketkeeper Prasanna Jayawardene to give medium-pacer Thisara Perera a first Test wicket.

The former captain, who has not made a Test century on home soil since reaching three figures against his native South Africa at The Oval in 2008, looked in fine touch while striking 14 fours in his 115-ball innings.

Pietersen had come in with England struggling at 14 for two, following the early loss of captain Andrew Strauss and Jonathan Trott.

But together with in-form opener Alastair Cook (55) he put on 106 for the third wicket and then shared a stand of 71 for the fourth with Ian Bell.

At stumps, Bell was 39 not out and nightwatchman James Anderson unbeaten on nought.

Earlier, Strauss was dismissed cheaply by Chanaka Welegedara for the third time in as many innings.

He managed just three runs before he opened the face against left-arm seamer Welegedara and gave a simple catch to Tharanga Paranavitana at first slip.

Strauss’s exit came after he’d twice been dismissed by Welegedara, falling lbw for four and nought, in the drawn second Test at Lord’s.

But Cook — playing his 66th consecutive Test and so breaking the England record shared by Alan Knott and Ian Botham — drove Welegedara off the back foot for a superb boundary.

Suranga Lakmal though had Trott caught behind for just four aftr angling a ball across the right-hander from around the wicket.

Pietersen got off the mark third ball with a driven four off Lakmal.

And in the final session of a day where more than three hours’ play was lost to rain, Pietersen was quickly into his stride with boundaries off Perera and Welegedara.

Cook went to his fifty with a single off seamer Dilhara Fernando, reaching his half-century in 92 balls with seven fours.

In the process the 26-year-old left-handed opener become the first England batsman in 48 years, and only the fourth in all, to score fifties in six successive Test innings.

Next delivery, Pietersen followed him to the landmark in just 56 balls including eight fours.

But when he drove confidently at Fernando, the type of shot that has been speeding to the boundary all season, the ball flew to Thilan Samaraweera, who held the gully catch at the second attempt.

England lead this series 1-0 after an innings and 14-run win in the first Test in Cardiff.

Victory here will see them go joint second in the ICC Test rankings alongside South Africa with only India, their next opponents, above them.

Dalmiya happy with allotment of international matches to Eden

It's 'nonsense' to let BCCI decide on UDRS: Modi