Kevin Pietersen hit his second successive century to help a resurgent England beat Pakistan by four wickets in the fourth and final day-night international here on Tuesday for a 4-0 whitewash. 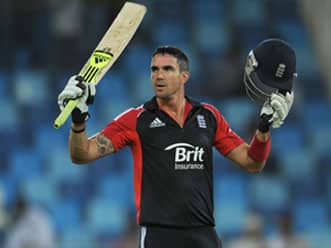 Kevin Pietersen hit his second successive century to help a resurgent England beat Pakistan by four wickets in the fourth and final day-night international here on Tuesday for a 4-0 whitewash.

The 31-year-old right-hander held the innings together during his 153-ball career-best 130 — his ninth one-day hundred — to help England chase down a 238-run target in 49.2 overs at Dubai Stadium.

Pietersen helped England recover from 68-4 with a 109-run stand for the fifth wicket with Craig Kieswetter (43) to maintain his team’s domination in the series in which they won the first match by 130 runs, second by 20 and the third by nine wickets.

By virtue of this win England overtook Pakistan at number five and pushed their rivals to sixth in the ICC (International Cricket Council) one-day rankings and partially made up for their 3-0 loss in the preceding three-Test series.

Pietersen hit Junaid Khan for a six and took a single in the next over to reach his hundred off 136 balls and finished with 12 fours and two sixes. His previous best of 116 came against South Africa at Centurion in 2005.

Pietersen had lost his opening partner Alastair Cook — who hit back-to-back hundreds and 80 in the first three matches — off the second ball of the innings to paceman Khan for four.

Jonathan Trott (15), Eoin Morgan (15) and debutant Jos Butler fell in the space of 18 runs before the Pietersen-Kieswetter stand lifted them from 68-4 to 177-5.

When Kieswetter was run out, England still needed 61 but Samit Patel (17 not out) in the company of Pietersen brought England within two runs of the win when Pietersen fell to Saeed Ajmal.

“We really had a very good one-day series,” said Cook. “It was a great challenge and we stood up and won.”

Misbah said Pakistan did show some fight but England were too good.

“We showed improvement from the last game but England and Pietersen were too good for us,” said Misbah. “Credit to England for playing well in this series and we were below par.”

Pakistan promised more than what they made after half-centuries by Asad Shafiq and Azhar Ali but were pegged back in the final overs with paceman Jade Dernbach taking a career-best 4-45.

Shafiq made a 78-ball 65 for his sixth one-day fifty while Ali notched a 89-ball 58 for his first to help lift Pakistan from the early loss of opener Mohammad Hafeez (one) after they elected to bat.

Misbah chipped in with a 52-ball 46 which included one four and a six.

Shafiq, who hit six boundaries, repaired the early loss during his second wicket stand of 111 with Ali but England pegged back Pakistan when Bresnan dismissed Shafiq off an inside edge and debutant left-arm spinner Danny Briggs accounted for Umar Akmal, who made 12.

Dernbach had Ali caught off a miscued drive by Morgan to leave Pakistan at 144-4 in the 34th over.

Misbah and Shoaib Malik (23) added 58 for the fifth wicket.

Pakistan made three changes as experienced batsman Younis Khan was missing for the second match in a row after he failed to recover from a fever, while opener Imran Farhat was left out due to a groin injury.

England also gave debuts to Briggs and Butler in four changes from the last game.

Man of the Match: Kevin Pietersen

Man of the Series: Alastair Cook

India, South Africa in contention for No 2 spot in ICC ODI Championship