Mohan Bagan are leading with 296 and are currently playing their second innings at 148 for 4 on Day 3 of Pink Ball Test.

CAB Super League’s Day 2 saw Mohan Bagan continuing their dominance with Mohammed Shami’s fifer against Bhowanipore Club. Bhawanipore were bowled out for 132 while Mohan Bagan began their second innings and ended their day at 148 for 4. The Pink Ball test will be telecast over Star Sports HD 2 and Star Sports 2 while live streaming will be available on starsports.com. They are leading with 296 runs and this time Bhawanipore will give their all to turn the tables around. Pink ball has surely worked wonders for bowlers this game and Shami has shone with maximum wickets. Arindam who remained unconquered on 49 was the top scorer for Bagan. Vivek Singh with 36 was the other major contributor. For Bhowanipore, Ayan Bhattacharjee pocketed 4/56. LIVE CRICKET UPDATES: CAB Super League, Mohan Bagan vs Bhawanipore Club, Day 3 at Eden Gardens

Shami’s first victim was Bhowanipore’s young wicket-keeper Santosh Sabanayakan (0) who fell trying to fend a vicious bouncer. Shami then picked up Parthasarathi Bhattacharjee (0), Uddipan Mukherjee (41), Shubham Chatterjee (8) and Geet Puri (12). Shami also mentioned after the match how he loved playing with the pink than the white one. In the first session Bagan could not add a single run too their overnight score of 286/8. Eyeing the West Indies tour next month, Shami returned to action in the 14th over and bowled six overs in tandem. But they were awarded 13 penalty runs which helped them get to 299/10. Rajkumar Pal (5) and Sanjib Sanyal (60) were the last two batsmen to fall.

Shami had made his Test debut at this venue with a career best nine-wicket haul against the West Indies in 2013. Saha, who is the India Test wicketkeeper, showered praise on the pink ball experiment. 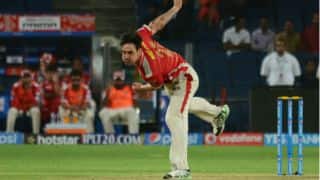