Kohli became the fastest to 5000 runs as captain, completing the feat in 86 innings.

Captain Virat Kohli remained unbeaten on 59 while his deputy Ajinkya Rahane was on a confident 23 as India made 174/3, ahead by 68 runs at stumps on the opening day of their maiden Pink Ball Test the second Test against Bangladesh at the Eden Gardens in Kolkata on Friday.

Kohli became the fastest to 5000 runs as captain, completing the feat in 86 innings. As captain, he was also the quickest to 4000 Tests runs (65 innings). He is the sixth captain to reach the 5000-run mark.

Opting to bat, India’s pacer bowling contingent led by Ishant Sharma steamrolled through the opposition batting order to bundle them out for a paltry 106.

Ishant, who bagged his 10th five-wicket haul in Tests, returned figures of five for 22 and was ably supported by Umesh Yadav and Mohammed Shami as they shared the remaining five wickets between them.

It was a horrible day for Bangladesh who had more trouble than expected when wicketkeeper-batsman Liton Das was forced to withdraw from the game after being struck by a bouncer from Shami. Liton retired hurt on 24 at tea and was later replaced by concussion sub Mehidy Hasan.

Nayeem Hasan too copped a blow to his helmet while batting but went on to complete his 19-run knock before pulling out due to concussion fears and Taijul Islam made the XI after Bangladesh came out to field.

Ishant struck first to get Imrul Kayes trapped lbw for four. Umesh then got the ball to do the talking to send back skipper Mominul Haque, caught superbly by Rohit Sharma at second slip for nought, before bowling Mohammed Mithun two balls later.

Opener Shadman Islam worked hard for his 29 off 52 balls before becoming Umesh’s third victim of the first session, which ended with Bangladesh on 73-6.

Ishant then returned to wipe off the tail alongside Shami who took the final wicket of Abu Jayed for nought.

India lost the in-form Mayank Agarwal early after he was given marching orders by Al-Amin Hossain for 14. Rohit Sharma’s affinity with Eden Gardens was snapped by Ebadat Hossain, who trapped the other opener for 21.

Kohli and Cheteshwar Pujara then held fort as the duo stitched 94 runs for the third wicket. Pujara, who tonked eight boundaries in his 55 off 105, became Ebadat’s second victim in the 40th over.

Rahane and his captain then ensured no more casualties as India look set to build on their good lead on the second day. 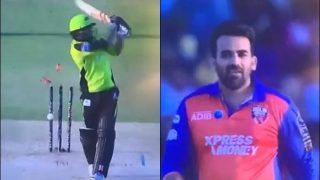 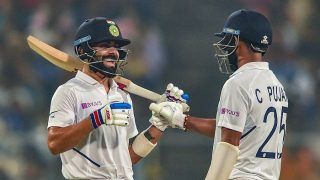