Played to my strength against India, says Johnson Charles

Played to my strength against India, says Johnson Charles

Johnson Charles made a stroke-filled 97 to lead the West Indies to sensational one-wicket victory over India in Match 2 of the CELKON Mobile Cup tri-nation tournament on Sunday at Sabina Park. Johnson Charles made a stroke-filled 97 to lead the West Indies to sensational one-wicket victory over India in Match 2 of the CELKON Mobile Cup tri-nation tournament on Sunday at Sabina Park.

The 24-year-old opener Charles hit eight fours and four towering sixes off 100 balls as West Indies recovered from 26 for 3 to reach their target of 230 for 9 to win with 14 balls left. The win was the second in a row for the home side following the six-wicket win over Sri Lanka last Friday.

Charles shared a fourth-wicket stand of 116 with left-hander Darren Bravo, who returned to form with well-polished knock of 55 off 78 balls with five boundaries and a six.

After that Darren Sammy lashed three big sixes in 29 off 26 balls. It however required the calm heads of last pair Kemar Roach and Tino Best to see the Windies home.

Roach hit the winning run to celebrate the victory on his 25th birthday and sparked celebration among the large, colourful crowd.

Speaking after the match, Charles said his simple approach was to put bat to ball.

“I did my thing! I felt nice and relaxed at the crease. I didn’t really feel any pressure, I was told to go out and play my natural game and that is what I did. In the last game [against Sri Lanka] I had no rhythm but this game I came out with a bit more intent and I knew exactly where I wanted to score. I played to my strength and played shots according to the fields India set,” said Charles after the match.

“When you get out for 97 it is always going to be a disappointing feeling but I have to say “well done” to Tino and Roach for getting us across the line. When we got across the line… that was huge pressure off my shoulders.”

Charles added: “We bowled well against the Indians and reduced them to a score we knew we could chase down. The pitch improved a bit, it got flatter and was more of a batting pitch. I would have liked to reached three figures and carry my team to victory but I’m happy we made it two wins in a row.”

Sunday’s innings was Charles’ second half-century against India in as many matches. Earlier this month he made a run-a-ball 60 in the ICC Champions Trophy 2013 at the Oval in England. He is a graduate of the Sagicor West Indies High Performance Centre and said his aim is to get better with every trip to the crease.

“I was at the Sagicor HPC for a year and I did a lot of batting drills while I was there. I learned a lot during my time there… playing straight was the one area where I improved and I want to keep improving as I go along,” Charles said. 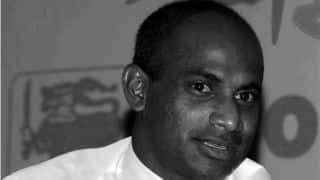 Sanath Jayasuriya: The Matara Marauder who emanated joy with his aggressive strokeplay