Lal, who had a brief stint as India coach in 1996-97, said Ashwin's action would have been justified if the offspinner had warned Buttler earlier.

New Delhi: Former India cricketer Thursday said a player of Ravichandran Ashwin‘s stature should not have “Mankaded” Jos Buttler in a controversial Indian Premier League (IPL) match, though his act did not violate any law.

The incident that has divided the opinion of cricketing world took place on Monday in the Rajasthan Royals (RR) innings when Kings XI Punjab (KXIP) skipper Ashwin, sensing that Buttler was backing up too far, paused during his bowling action and removed the bails, a dismissal popularly known as ‘Mankading’.

“I don’t think Ashwin has done the right thing at all, considering his stature and such a successful international career. He is such a big player and an act like this is very small,” Lal said. (ALSO READ: Ashwin did nothing wrong, he was operating within the laws: AB de Villiers)

“Had it been Virat Kohli or any other Indian cricketer he would have been criticised. Such an act is not part of the game, it is away from it but whatever happened was correct. Ashwin is right in his place, but he shouldn’t have done, it’s as simple as that,” he added.

Lal, who had a brief stint as India coach in 1996-97, said Ashwin’s action would have been justified if the offspinner had warned Buttler earlier. He also cited the example of former India captains Sachin Tendulkar and Kapil Dev, who were involved in instances where a player was dismissed in the same controversial fashion.

In an ODI at Port Elizabeth in 1992, Kapil had whipped out the bails of Peter Kirsten at the non-striker’s end after loading up. He had warned the South African twice before dismissing him.

of Sri Lanka, during a Commonwealth Bank series match in Brisbane 2012. Subsequent to which the appeal was withdrawn by India.

“It’s not in the spirit of the game, so Sachin didn’t do it. He recalled the decision. Even Kapil (Dev) warned Peter Kirsten twice before dismissing him. Had Aswin warned Buttler it would have been okay,” Lal said. (ALSO READ: ‘It s too late to say sorry Mr. Ashwin, you will be remembered for that low act’)

Lal recalled how West Indian Courtney Walsh abided by the ‘Spirit of the Game’ by not ‘Mankading’ Pakistani player Saleem Jaffar even after warning him thrice during a World Cup knock-out clash in Lahore, way back in 1987.

“It’s good it happened in the IPL, imagine if it happens in the World Cup, on the last ball someone does this. I remember Courtney Walsh had lost the World Cup match against Pakistan when he refused to run out the non-striker.” 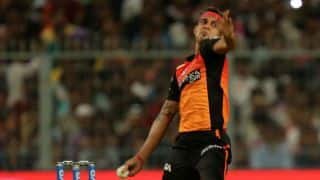