England coach Trevor Bayliss feels that considering the volume of cricket teams of the likes of India, England and Australia play, their players need to rest.

Following their defeats in the opening two Tests against England, questions are being raised over Indian team’s preparedness for the tough tour. Several former cricketers including Sunil Gavaskar have said the team should have played more practice matches.

India had a one-off practice match against Essex ahead of the five-Test series that began from August 1 and it was curtailed to three from four days.

Across the four innings so far, barring captain Virat Kohli, the rest of the batters have failed to deal successfully with the bowling-friendly conditions. But they have received some support from the opposition camp on the accusation of not being prepared well.

England coach Trevor Bayliss feels that considering the volume of cricket teams of the likes of India, England and Australia play throughout a year, their players need to rest and recuperate and that under such circumstances it’s impossible to schedule game in between tours/series.

“The simple fact is, teams like Australia, India and England play so much cricket,” Bayliss was quoted as saying by PTI. “I’m sure everyone would love to play more warm-up matches than they do. You simply can’t fit them in. Somewhere along the lines the players have to have some sort of rest. Most will play all the games but to keep putting more practice matches in, it’s almost impossible. It’s just the way it is.”

While he said teams including his England will love to have more such matches when they are the touring party, but the cramped schedule makes it a tough proposition. “We play the practice matches that we do and get asked the same questions if your preparation right. Well, we’d love to have a few more games. But there aren’t 10 days in a week,” he said.

England have dominated the world No. 1 India in conditions conducive to bowling at Egdbaston and Lord’s so far, taking a 2-0 lead. Bayliss hopes that their bowlers will continue to have the upperhand. “In these types of conditions (like Lord’s), I don’t think it’ll matter what the wicket is like. Here there’s always a little bit of grass on the wicket. With the overhead conditions, it’s the big thing,” he said.

While acknowledging that England were lucky as the weather was in their favour, he pointed out that it’s the opposite when they are the touring side.

“…things fell our way (at Lord’s): winning the toss, overcast the first day and a bit clear on the second day when we batted. There wasn’t as much swing the second day but some movement off the wicket, which is difficult to handle. Then it started to swing a little bit again.

Like on their last visits to England shores, Indian batsmen are facing a stern ‘swing’ test and so far, they are failing. Bayliss compares it to the ‘spin’ challenge visiting teams face when they tour subcontinent. “When the ball is swinging around they have some difficulties, as it is when it’s spinning and we go to the subcontinent. It’s a challenge for any team to play in conditions you’re not used to and some of them are struggling a little bit,” he observed. 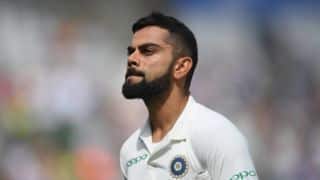