Sri Lanka batsman Dhananjaya de Silva feels the ploy of using attacking shots to throw England bowlers off-guard wasn t the best of ideas for Sri Lanka. On Day 2 of the third Test between the two sides in Colombo, Sri Lanka s batsmen committed hara-kiri, and from a position of control at 173 for 1, lost their last eight wickets for 67 runs to be eventually bowled out for 240. Legspinner Adil Rashid picked up his second five-wicket-haul in Tests to finish with 5 for 49, and was aided by Ben Stokes, who claimed 3 for 30.

“When we were 173 for 1 and then I got out, I don’t think the others were able to take the game forward as much as they could have,” de Silva said. “When they tried to attack us, we went to our attacking shots. I don’t think that was a good option at the time.”

Opener Dimuth Karunaratne continued his fine form with the bat and struck a third successive half-century. He and de Silva added 142 runs for the second wicket as Sri Lanka seemed to be heading towards a big total. But as it turned out, six out of Sri Lanka s last seven batsmen could manage only single-digit scores.

“Our batting was very weak. But even more than that they bowled really well with a plan. They dried up the boundaries and bowled aggressively. If we had played to a better plan, we wouldn’t have crashed like this,” said de Silva.

In search of a consolation win having lost the first two Tests, de Silva pointed out that Sri Lanka paid the price for playing poor shots and that the batsmen should put a price on their wickets.

“Taking the wrong option at the wrong time is what has cost us. The batsmen should put a price on their wicket. When you play Tests, you have to spend time and try and tire out the opposition,” he said. “Then only the runs start to come. We have to think about all of that. The batsmen have to come up with those solutions themselves. No matter what someone else tells us, it’s the batsmen’s own mistake. They have to figure it out.”

England were 3/0 after 4 overs before bad light resulted in early stumps at the SSC. 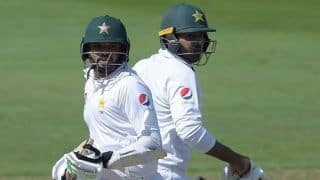