Playing in Dubai would have put Afghanistan in the Asia Cup final: Asghar Afghan

Playing in Dubai would have put Afghanistan in the Asia Cup final: Asghar Afghan

Afghanistan s captain Asghar Afghan believes that had their games been in Dubai, things could have been very different.

Asghar Afghan, the captain of Afghanistan, believes that his team would have been in the final of the 2018 Asia Cup had their matches been played in Dubai instead of Abu Dhabi. After the team bowed out with a memorable tie against India, the skipper stated that Afghanistan had sounded “the warning bells” to major cricketing nations.

Afghanistan beat Sri Lanka and Bangladesh at the Sheikh Zayed Stadium in Abu Dhabi to enter the Super Four stage of the tournament, where at the same venue they narrowly lost to Pakistan by three wickets with three balls remaining and to Bangladesh by three run. Shifting to the Dubai International Stadium – where they had previously played 10 limited-overs matches, winning seven – to face India in their last match, Afghanistan made 252/8 in 50 overs and then tied the match as Rashid Khan defended six runs, leaving Asghar to term the result as good as a win.

Speaking to reporters after the tie, Afghan stated that Dubai would have proved beneficial to his team.

I was sure that we would play the final, he said. I was sure that the conditions in Dubai would suit us better, because no team has played as much there as we have. It was hard luck that our matches were all in Abu Dhabi. If our matches had been played on this track in Dubai, I can confirm that Afghanistan would have been in the final. That was unfair on us. The wicket in Abu Dhabi went against our bowling. Nevertheless, our bowlers and batsmen have performed.

Despite not making the final, Afghanistan have showed their strength as an ODI team, well over a year since they were granted Full Member status. Beating Sri Lanka by 91 runs and Bangladesh by 136 runs and running each Super Four match into the last over underscores the threat Afghanistan pose, as well as the fact that winning the key moments remains huge – a fact that Afghan said his team now realised.

I said before the Asia Cup in a press conference that Afghanistan did not come here to just play the Asia Cup. We came here to make a statement and that is what we have done he said. We fell short, you can say because of a lack of experience. The boys understand that, they know what has to be done next time. It s been fantastic, and we ve learned a lot from this Asia Cup. Inshallah, the next time our cricket will be the best. 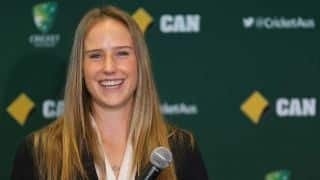