Elgar, following the third day's play, said that he learnt from the his experiences from playing in India.

South Africa put up a solid fight on the third day of the first Test against India as Dean Elgar and Quinton de Kock scored hundreds at the Dr. Y.S. Rajasekhara Reddy ACA-VDCA Cricket Stadium in Visakhapatnam on Friday.

Elgar scored his maiden Test ton on the Indian soil as he scored 160 off 287 balls, hitting 18 fours and four sixes before R Ashwin’s five wickets tilted the match in India’s favour as South Africa. The visitors were 385/8 at stumps on the third day, trailing India by 117 runs.

Elgar, following the day’s play, said that he learnt from the his experiences from playing in India.

“It’s good to contribute once again. Playing in India is very tough. The last time I was here, I was less experienced. In those four years, I have grown a lot as a cricketer. I have played county cricket, which has helped,” Elgar said.

Elgar also discussed what he did differently this time around as he scored first hundred on the Indian soil.

“If you want to use our last series in India, we shouldn’t use that because of the wickets. You need to defend well against spinners, because then you give yourself the best chance of attacking. County cricket with Surrey has helped a lot. Playing spin is something I have been conscious of, and you will face a lot of spin when coming to India,” said Elgar.

“I think you have to find your strengths (when asked about him hitting the ball in the air). That’s a strength of mine, and thankfully it worked out in this game. Implementing those, and obviously on this wicket, which has played well,” he added.

Elgar also heaped praise on the wicketkeeper-batsman Quinton de Kock. The two added 164 runs together before Elgar got out. de Kock, meanwhile, completed a hundred before being dismissed by Ashwin.

“I am extremely happy for Quinny. He’s a bit of a genius in the way he goes about it. It’s not a surprise he’s got a 100 here. I think this is the start of a great career for Quinny,” he concluded. 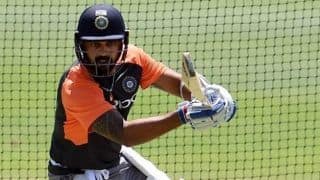