The first-class Plunket Shield has a new leader at the completion of round six, after Canterbury usurped Northern Districts at the head of the table this evening.

The first-class Plunket Shield has a new leader at the completion of round six, after Canterbury usurped Northern Districts at the head of the table this evening. Twenty-four-year-old opener Chad Bowes set up Canterbury s successful run chase at the Basin Reserve with his third first-class century (his second for Canterbury and in the Plunket Shield), reaching 149 before Henry Nicholls (an unbeaten 71) and Cole McConchie (47 not out) hunted down the remainder of the 324 target for victory in the final session.

Fresh from claiming the one-day Ford Trophy, Canterbury had headed into the resumption of the red-ball contest in second spot, but now holds an eight-point advantage over second-placed ND with four rounds remaining. The Firebirds have maintained their position in third spot, one rung above the Auckland Aces while at the foot of the table the Otago Volts’ first outright of the 2016/17 first-class season (against Northern Districts in Whangarei) has seen them clamber over the still-winless Central Stags into fifth.

The injury-hit Stags can, however, claim the season’s top wicket-taker after six rounds, off-spinner Ajaz Patel yet again leading the list with 30 victims so far this summer. Otago Volts captain Brad Wilson (510 runs) holds a narrow lead over Firebirds veteran Luke Woodcock (an even 500) on the run-scoring front. 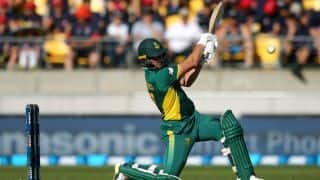 Virender Sehwag on Gurmehar Kaur: Everyone has right to express their views