Ponting, Clarke keen to return to form in Tests

Ponting, Clarke keen to return to form in Tests

Australia's star batsmen Ricky Ponting and Michael Clarke are hoping to shrug off their recent poor run in Test cricket when they take on Sri Lanka from Wednesday. 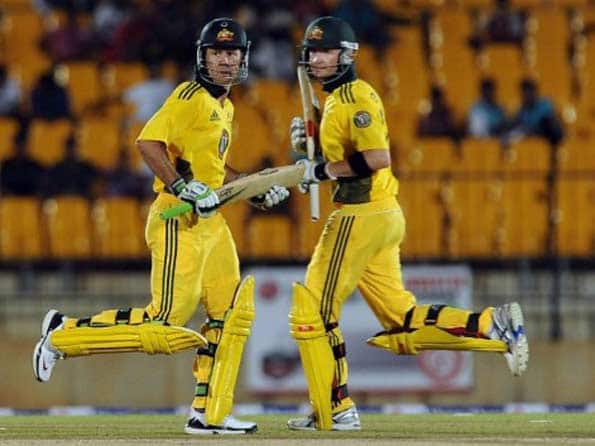 Australia’s star batsmen Ricky Ponting and Michael Clarke are hoping to shrug off their recent poor run in Test cricket when they take on Sri Lanka from Wednesday.

The tourists will rely heavily on the batting exploits of captain Clarke and his predecessor Ponting to win the three-Test series, Australia’s first since the embarrassing 3-1 Ashes defeat to England in January.

But the pair have struggled in the five-day format for almost two years and will be keen to make amends when the first Test opens at the Galle International Stadium.

Ponting, 36, is the third highest run-getter in Test cricket behind the Indian duo of Sachin Tendulkar and Rahul Dravid, with 12,363 runs from 152 matches and 39 centuries.

But he has not scored a Test hundred in his last 20 innings since making 209 against Pakistan at Hobart in January 2010.

Clarke, 30, has fared no better, going without a hundred in 10 matches after hitting 168 against New Zealand in Wellington in March last year.

But a turnaround in the fortunes of the tourists’ captain and elder statesman may be just an innings away.

Ponting, who made way for Clarke as captain after the World Cup in April, scored 53 and 90 not out during the preceding one-day series against the Sri Lankans which Australia won 3-2.

Clarke also chipped in with two half-centuries in the series and then scored 104 in a three-day practice match in Colombo last week ahead of the first Test.

Clarke, who begins his reign as a full-time Australian Test captain on Wednesday, said he was keen to score Test runs again.

“My form has not been as good as I would like in Test cricket,” Clarke told the travelling Australian media.

“For me, Test cricket is the ultimate, the pinnacle, and I want to be at my best.

“I could not have asked for better preparation, but now I have got to do it when it counts. It’s important to make runs every time I bat but I would prefer a hundred in the first Test.”

Ponting admitted Australia’s Ashes loss when he was captain had affected his batting, and now looked forward to doing well as the team’s frontline batsman.

“The team’s performance had started to play on my mind and it probably dragged my batting down a little bit,” Ponting told Cricinfo in a recent interview.

“I have got to score runs that are going to be enough to win for Australia, and that’s my main objective for the immediate future.” (AFP)