Pragyan Ojha struck twice in the second session to help India take the upper-hand after England batted resolutely in reply to India's first innings total of 327 on the second afternoon of the second Test here on Saturday. 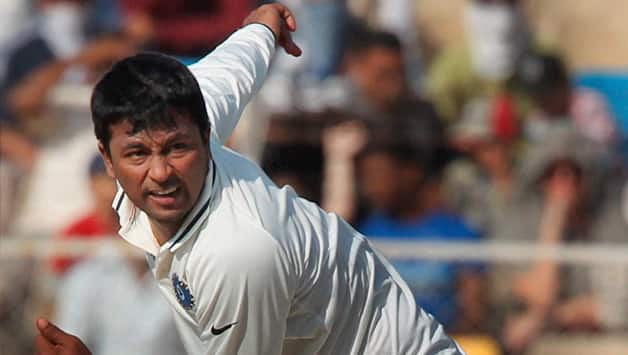 Pragyan Ojha struck twice in the second session to help India take the upper-hand after England batted resolutely in reply to India’s first innings total of 327 on the second afternoon of the second Test here on Saturday.

Ojha had the dogged Compton caught at slip with a sharply turning ball for 29 to draw first blood and trapped one-down batsman Jonathan Trott (0) leg before as England slumped from 66 for no loss to 68 for 2 within no time.

At the break, England were 77 for two in 36 overs, with the left-handed Cook, batting on 43 after a stay of 132 minutes, and new batsman Kevin Pietersen (5) at the crease.

The tourists were 250 runs behind the home team’s score at the interval after Cook and Compton put on 66 runs for the first wicket before the latter edged a sharply spinning ball to slip fielder Virender Sehwag after a stay of 112 minutes.

In the morning, England finally dismissed Cheteshwar Pujara in the series, for the first time in three innings, after he made a superb 135 before India were all out 22 minutes before lunch.

Pujara was ninth out at 316, after batting for almost the entire day yesterday and with just half an hour left for lunch today, after he pulled India out of a deep hole, when he was lured out by Swann and stumped by Matt Prior.

Pujara’s seven and a half hour vigil lasted 350 ball and he struck 12 fours, including two off cut shots today.

India lost their remaining four wickets after adding 61 runs this morning with off-spinner Graeme Swann sending back Pujara, Harbhajan Singh (21) and Zaheer Khan (11) in the space of 10 balls spread over three overs.