Ojha last played a Test for India in 2013 in Sachin Tendulkar's farewell match.

Kolkata: Out-of-favour India left-arm spinner Pragyan Ojha may finally get a clearance from Cricket Association of Bengal (CAB) tomorrow to return to his home team Hyderabad. The CAB who had named Ojha in their Ranji probables will have a meeting tomorrow to finalise on Ojha, joint secretary Avishek Dalmiya told reporters today.

The development comes after Hyderabad Cricket Association (HCA) today shot off a mail to the BCCI asking the parent body for guidance to deal with the case as August 31 is the deadline after their “request letters” to CAB went unanswered. “We’re positive that he will be released,” HCA secretary T Seshnarayan told PTI. He further said he had requested CAB to release Ojha in two letters but he has not got any response till today.

“I have finally decided to write to BCCI seeking guidance as this case is unique,” Seshnarayan said. “I don’t think the CAB will retain a player when he is unwilling to play for Bengal. He has some genuine personal issues with his wife unable to travel and employed here,” he said from Hyderabad.

“Even in a work atmosphere I cannot ask my employee to stay if he is not ready to give 100 per cent. It’s about being compassionate as well,” he added.

The former India spinner was unavailable for a reaction. Ojha last played a Test for India in 2013 in Sachin Tendulkar’s farewell match and took a 10-wicket match haul but only to be ignored by the selectors. With Hyderabad relegated to Group C in Ranji Trophy, Ojha switched allegiance to Bengal in 2015-16 to get better chances of making a comeback and claimed 36 wickets from nine matches, their joint highest along side pacer Ashok Dinda.

But he had a lacklustre last season with 10 wickets from six matches. 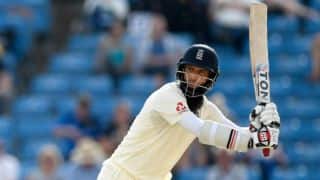