Pragyan Ojha is hoping the BCCI will approve his request to play in English county season in a bid to get back into the Indian scheme of things.

Indian left-arm spinner Pragyan Ojha could be in line to a county stint in the upcoming season. Ojha who has been left out of Team India since 2014, when he was reported for action and was banned until corrective measures were taken in his bowling. In a recent meeting of Board of Control for Cricket in India it had been said that Indian players could be permitted to play in foreign leagues and foreign players could take part in Indian domestic competitions. Ojha who last played for Surrey in 2011 is likely to turn up for them again. Ojha played only 4 matches for them picking 24 wickets int he process. BCCI: Duleep Trophy 2016-17 will witness day-night Test

Sourav Ganguly had proposed the idea of letting Indian players play English domestic county season in a recently held BCCI meeting. Ojha confirmed the same as reported by Mumbai Mirror. Ojha said, “I have written to the BCCI”. Speaking on the same a BCCI official said that,” At this stage we have decided to permit players who want to play abroad if they are not taking part in any IPL style tournaments”. He further added,” The IPL is not too fragile to be weakened by the rise other tournaments”.

Speaking of county cricket Michael Lumb scored his second hundred in three days as Nottinghamshire again surpassed the 400-run mark on their way to a victory in English county cricket’s 50-over One-Day Cup on Wednesday. 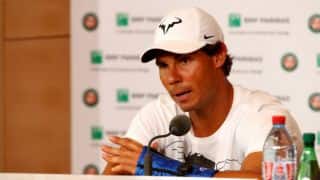 Rafael Nadal pulls out of Wimbledon 2016