Pravin Amre is eager for the side to beat the New South Wales's record of winning the maximum number of First-Class titles.

Record Ranji Trophy title holders Mumbai is all set to play their 500th game of the tournament when they take on Baroda in Round 4 of the ongoing tournament next week. It would also be the most number of matches to be ever played by a side in the tournament. Having already won 41 Ranji titles till date, Mumbai would be definitely eyeing for their 42nd this season. Meanwhile, former Mumbai and Indian cricketer Pravin Amre is eager for the side to beat the New South Wales‘s record of winning the maximum number of First-Class titles, i.e. the Sheffield Shield. NSW have won the title 46 times, while Mumbai are the second most successful side in the world with 41 titles. Pravin Amre s inaugurates Mumbai s latest state of art cricket coaching facility

On Mumbai’s 500th Ranji match: I think it s a very prestigious and historic moment for any association and is a really proud moment for Mumbai Cricket, which will become the first team to play 500 Ranji Trophy matches. This is also the occasion where we can really thank and felicitate those people who really contributed throughout this journey, said Amre, as reported by Sportswallah.

We would like to invite those captains who were the part of that era. It will be really a special function for all the captains. Be it Mumbai or be it for their contribution for Indian cricket. As an association, there will be special programme on this occasion and that will be updated to media accordingly. Just now, we had the meeting on how this event can be made successfully. Anybody like experience people from media have got suggestion, do let us know about it.

On breaking New South Wales’s record: Recently, India played its 500th Test match, but it s also for an association to reach such historic milestone is a huge landmark. We know that NSW has won the most number of First-Class championships and after that it is Mumbai, and that s the beauty of it. We would like to break NSW’s record as well.

On Mumbai’s 15 consecutive titles between 1958-59 and 1972-73: We all know that we are going to reach a historic milestone, especially when we talk about 41 time championship title. This is a special moment in Indian cricket or maybe the world cricket. We won the title 15 years on the trot and that s the benchmark we set and maybe that can be the motivation for next generation on how to win 15 back to back Ranji Trophy championships.

On Mumbai’s contribution to Indian cricket: We will make it like a mega event as this is the time to show the entire India like Mumbai is Mumbai and rest is India because that s the contribution has been by Mumbai for Indian cricket and to the players who have achieved. It s players who made us win 15 titles on trot and also the administration, who were always behind them.

It will be a unique, emotional and heart-touching event to inspire the future generation of what s the beauty of getting a Mumbai Ranji cap, the quality you need to have to be part of Mumbai team. I think media is going to play huge role because all the Mumbaikars should be aware of this event. We know there are die-hard Mumbai fans and this can be such an event to show our strength. Mumbai has won 41 Ranji Trophy titles and second best is 8, that s the difference. 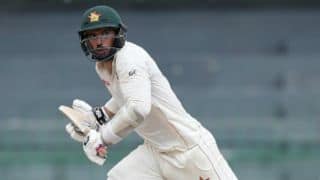 Graeme Cremer: First innings with the bat is crucial in Test cricket