In the game played between Rajasthan Royals and Kolkata Knight Riders in Indian Premier League (IPL) 2014, Kolkata lost their way after a fine start by Gautam Gambhir and Robin Uthappa. Shane Watson was the wrecker-in-chief, as he took three wickets in a single over. To lose both Gambhir and Uthappa in a single over certainly didn’t help their cause. It was followed by both Manish Pandey and Yusuf Pathan getting out to Pravin Tambe. Tambe then got a hat-trick by taking Doeschate’s wicket. A superb performance by the veteran leg-spinner with a box of tricks.  It is the same old story of modern day batsmen struggling to pick a leg-spinner.

Tim Southee then went around the wicket to change the angle and keep the batsmen on a tight leash but lose his plot slightly by trying over the wicket angle against Shakib Al Hasan. Actually, Shakib has just about kept them in the game by playing a few shots.

Earlier, the experienced campaigner Gambhir came back to form by essaying some fine shots off Rajasthan’s bowlers. He played even lofted strokes to keep the scorecard ticking. Gambhir was severe on Rajat Bhatia’s medium pace bowling.  He reached his 21st half-century in IPL with a fine stroke that raced to the boundary boards. 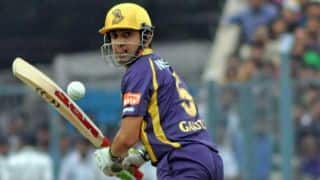 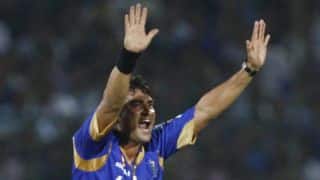