BCCI acknowledges the stellar role, Rahul Dravid, Head Coach of the India U19 and his support staff have played in creating a special bunch of players.

The BCCI congratulates the India U19 team for winning the ICC U19 World Cup 2018. Before they arrived in New Zealand, India were favourites to win the title and they have performed like champions right from the first game. With an eight-wicket over Australia, India are now the most successful side in the history of the tournament with four titles.

The performance of the youngsters is an extension of the strong system that BCCI has built where talent is identified, nurtured and given an opportunity to shine.

BCCI acknowledges the stellar role, Rahul Dravid, Head Coach of the India U19 and his support staff have played in creating a special bunch of players. The Venkatesh Prasad-headed All-India Junior Selection Committee spent hours watching the boys before the final selection was made. A lot of planning was involved and scheduling of the U19 Challenger Trophy ahead of the World Cup prepared the boys thoroughly while it also gave the selectors one more look at the talented pool.

Mr. CK Khanna, Acting President of the BCCI, said, The nation is celebrating today thanks to the India U19 team. The boys have been terrific and did not let their guard down. The winning margins in all the matches show their dominance. It speaks about the rich quality we have not only at the senior level, but also at the junior level. Despite most of the boys playing in New Zealand for the first time, they adapted brilliantly to the conditions. We have a good mix of fast bowlers, spinners, and batsmen, who are capable of winning the match on their own.

Mr. Amitabh Choudhary, Acting Hony. Secretary, BCCI, said: It’s a proud day for everyone associated with the BCCI and Indian cricket. India are the only team to have qualified for the final of the last three ICC events. The Virat Kohli-led side qualified for the final of the ICC Champions Trophy 2017 in England, Mithali Raj’s girls made it to the summit clash of the ICC Women’s World Cup and Prithvi Shaw’s boys have lifted the U19 crown in New Zealand. When it comes to performances in ICC events, India have always raised their level.

Mr. Rahul Johri, CEO, BCCI, said: Winning the World Cup without losing a solitary game is a fantastic achievement and I congratulate everyone for this dominant show. India have won the World Cup for a record fourth time and expectations from these boys are going to be high. In Rahul Dravid, we have a fantastic coach who is moulding the youngsters and also fine-tuning the boys at the India A level before they progress to the senior side. 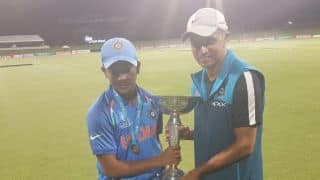 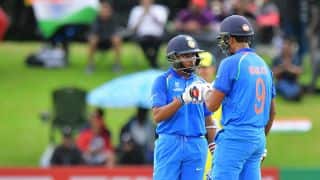