Dhawan blazed his way to an unbeaten 104 off 91 balls with 19 fours and three sixes in the historic Test against Afghanistan.

The BCCI congratulates Shikhar Dhawan for becoming the first Indian cricketer to score a century before Lunch on Day 1 of a Test. Dhawan blazed his way to an unbeaten 104 off 91 balls with 19 fours and three sixes in the historic Test against Afghanistan.

The previous record for the highest score by an Indian batsman was held by Virender Sehwag, who scored 99 not out against West Indies in Gros Islet. Dhawan is only the sixth batsman overall to get to triple figures in the first session.

BCCI Acting President, Mr CK Khanna said, Scoring a century in the first session is an incredible feat. I congratulate Shikhar Dhawan for his fabulous innings. It was a special knock, befitting the special occasion.

Mr Amitabh Choudhary, Acting Hon. Secretary BCCI said, With his stunning batting display, Shikhar Dhawan ensured it was an outstanding morning in Bengaluru. We had dignitaries from both the countries witnessing the game and many more following it across the globe.

Mr Rahul Johri, CEO, BCCI said, Shikhar Dhawan entertained everyone with his attacking batting. He batted fearlessly and put Afghanistan bowlers on the back foot. To bat with such a high strike rate isn t easy, but Dhawan looked unstoppable. 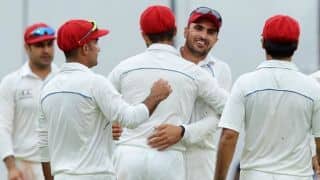 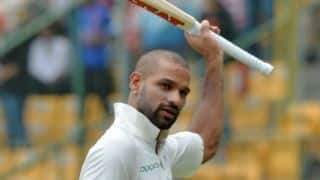