The BCCI had put in all their efforts and resources to stage this game and I am very happy at the outcome."

History was created in Bengaluru when India  hosted Afghanistan in their first-ever Test at the M Chinnaswamy Stadium. Pulling out all stops to make this historic event a memorable affair, the BCCI  hosted dignitaries from the Government of India and Afghanistan.

In attendance were Chief Executive of the Islamic Republic of Afghanistan, Mr Abdullah Abdullah and Indian Minister of State, Sports and Youth Affairs Col. Rajyavardhan Rathore. They greeted the two teams before the start of play. Mr Rathore also read out a statement from Mr Narendra Modi, Hon’ble Prime Minister of India.

The BCCI invited former India great Salim Durani, the only Indian cricketer to be born in Afghanistan for the special occasion and he presented a special BCCI memento to Afghanistan captain Asghar Stanikzai.

Mr Amitabh Choudhary, Acting Hon. Secretary BCCI said, “I congratulate Afghanistan for becoming the 12th nation to play Test cricket. The Afghan players were among the top performers in the Indian Premier League and I am sure they will prove their mettle in the longest format too. The BCCI had put in all their efforts and resources to stage this game and I am very happy at the outcome. Today, the India-Afghanistan relations have scaled a new peak.”

Mr Rahul Johri, CEO, BCCI said, “Through cricket, the BCCI is pleased to provide a platform that further strengthens the historic bond between the two South Asian countries. The India-Afghanistan friendship is deep and cricket is a unifying factor. The BCCI has extended technical and infrastructural support to the Afghanistan Cricket Board and is delighted to see them play the longest format of the game.” 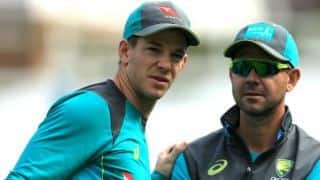