Southern Star Elyse Villani and South Africa's Dane van Niekerk spoke to the media after the two teams played out a draw in the fourth One-Day International at C.ex Coffs Stadium in Coffs Harbour.

Commonwealth Bank Southern Star Elyse Villani and South Africa’s Dane van Niekerk spoke to media today after the two teams played out a draw in the fourth One-Day International at C.ex Coffs Stadium in Coffs Harbour. Needing eight runs to win off the final over, South Africa fell one run short after Masabata Klaas (6) was run out on the last ball of the match. South African duo Dane van Niekerk (81) and Marizanne Kapp (66) had earlier rescued their side after falling to 4-40 in the 12th over, the pair combining for a 144-run partnership before an Elyse Villani run out turned the game back in Australia’s favour.

Spinner Jess Jonassen was the leading wicket-taker for Australia with figures of 3-37, while debutant Amanda-Jade Wellington (1-35) remarkably took a wicket with her first ever ball for Australia; Villani (1-37) also claimed her first wicket for Australia.

Earlier in the day, a new opening combination of Beth Mooney (14) and Nicole Bolton (63) were first to experience the Coffs harbour pitch after Meg Lanning won the toss and elected to bat.

Bolton’s second consecutive half-century pushed the total past 100 and with yet another impressive innings from Ellyse Perry (69), 35 to Alex Blackwell and 24 to Elyse Villani, Australia compiled 242 their second highest score of the series when batting first. 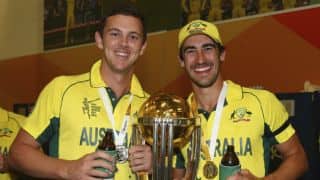