Trisha Chetty believes that the teams that adjust to conditions the best will make the semi-final stage of the tournament.

Trisha Chetty believes that the South Africa Women have got what it takes to go far in this year s ICC Women s World Cup in England. Speaking after the team s first practice in Oakham since their arrival in the United Kingdom yesterday, the veteran wicket-keeper/batter believes that the teams that adjust to conditions the best will make the semi-final stage of the tournament. It s not an easy place to play (England), we need to adjust to the conditions as quickly as possible because the teams that qualify for the semis are going to be the ones who do that successfully, she commented. As one of the most capped players in the team, Chetty has seen her fair share of cricket in the years since she made her debut in 2007 against Pakistan in Pretoria.”

“Since then, she has collected a wealth of experience in her 10 years of playing for the national team and also participating in international women s leagues such as the Australia Women s Big Bash.” She said; I m very excited to be playing for South Africa still after all these years. This will be my third 50-over World Cup and the feeling of being selected for such a big occasion doesn t change. I just want to do my absolute best and represent us well and help the new girls as much as possible. With 91 One-Day Internationals under her belt, and a fair amount of experience of what conditions in the United Kingdom should play like, she believes that the team has played well over the last several months and need to just play their brand of cricket consistently in order to achieve their desired result.

We ve played some really good cricket in the last few months, but we lacked that consistency that can take us from being a side with a lot of potential to being a serious contender in world cricket and we are definitely looking to correct that. We ve spent a lot of time on this and now is going to be the time that we show what we ve learned. Observing the youngsters navigate their way at today s practice gave her encouragement ahead of their first warm-up match against Australia on Tuesday.

The youngsters struggled a bit at first during practice today, it was clear that they found the conditions a bit challenging but it was really good to see them come into their own by the session s end, she continued. The seniors were all there to talk to them and help out and everyone looked really good at the end of the day. South Africa s first official match of the tournament will be against Pakistan on Sunday, 25 June after their two warm-up matches against Australia and West Indies on Tuesday (20 June) and Thursday (22 June). 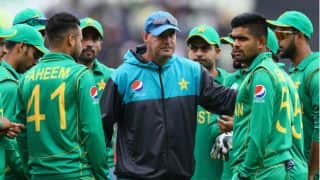