New Zealand play the first ODI on 22 October at Wankhede Stadium in Mumbai.

A groin strain has ruled out Todd Astle from New Zealand upcoming ODI and T20 series against India.

Astle suffered the injury in a warm-up game between New Zealand and a President Board s XI in Mumbai on Tuesday. Further assessment and a scan confirmed Astle to have suffered a tear on his right side, which will see him ruled out for around three weeks.

Ish Sodhi, who was originally only named in the Twenty20 squad, will replace Astle in the ODI side.

Todd was really impressive in the recent New Zealand A tour over here and had done everything he possibly could to get himself ready for this series, said Hesson.

He deserved this opportunity and everyone in the team is certainly feeling for Todd. He ll return to New Zealand and get himself ready for a big summer.

New Zealand play the first ODI on 22 October at Wankhede Stadium in Mumbai. 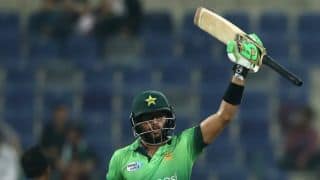