The first ODI was won by New Zealand whereas the second one was washed out due to wet outfields. Australia need to win the final match to level the series.

Ish Sodhi has been called into the New Zealand squad for the third ODI of the Chappell-Hadlee series against Australia on Sunday. Martin Guptill s availability for the third ODI remains uncertain, which will see Dean Brownlie travel with the squad to Hamilton. Tom Blundell will drop out of the squad and return to Wellington. Black Caps selector Gavin Larsen said conditions obviously played a part in the selection. History shows that the Seddon Park pitch can be spin friendly and for that reason Sodhi has been brought into the squad. We wanted the option of two specialist spinners for this match and it s a venue that Sodhi has had some success in at in the past. Mike and Kane will now get the opportunity to assess the pitch over the next couple of days and make a decision from there as to who will be in the playing eleven , said Larsen. NZ vs AUS 2nd ODI at McLean Park, Napier: Abandonment irks cricketers and fans alike

Larsen said there was still a question mark over Guptill. Martin has made progress in the last couple of days, but it s not yet clear whether he ll be available for selection. At this stage it s probably 50-50.”

Kiwis lead the series 1-0, with the final match beginning at 11am on Sunday. 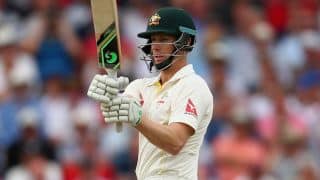