Gibson says the No.1-ranked Rabada is geared up for the match, and does not need any more motivation to perform following a busy week of legal hearings off the field.

Standard Bank Proteas head coach, Ottis Gibson, says the return of pace spearhead Kagiso Rabada is a big lift for the squad ahead of the third Sunfoil Test match against Australia starting at PPC Newlands on Thursday. Rabada is available for selection after he was found not guilty of the level two charge of making inappropriate and deliberate physical contact with a player following an appeal hearing in Cape Town on Monday.

Gibson says the No.1-ranked Rabada is geared up for the match, and does not need any more motivation to perform following a busy week of legal hearings off the field.

We are very happy that he (Rabada) is allowed to play, Gibson said ahead of the squad s practice at Newlands on Tuesday. We believe that it is the right decision at the end of the day. He has been made aware of his on-field celebrations I don t want to say behaviour because he is not a badly-behaved kid- he is just excitable and exuberant at times. When you are playing the best team in the world sometimes that will come out of you.

He is a very strong character, he said of Rabada. He came out of the hearing after six hours and just wanted to practice, that is what he loves to do. We are pleased that he has been allowed to do that for the rest of the series. He has been made aware of his responsibility going forward, not just to himself, but to the team as well. He is an important fit in our team, we can t afford to not have him available.

The coach believes the squad will be feeding off the confidence and positive energy from the six-wicket win to level the series in Port Elizabeth last week, despite the long break and disruptions between matches. Another positive for the squad is the return to fortress Newlands, a venue where they have only lost four out of 31 matches since re-admission.

Rabada himself will be anticipating the return to a successful hunting ground, where he has taken 19 wickets in three matches at a strike-rate of 31.7.

The way the series has been played, there has been a lot of good cricket, Gibson said. The groundsman says the wicket here will be similar to what it was for the last match (against India in January). We expect the two teams to go hard at each other on the field and leave some of the off-field stuff off the field. 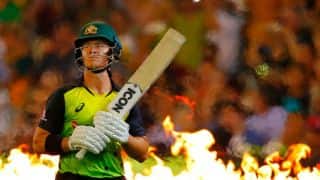