Mumbai: Triumph Knights Mumbai North East became the first champions of the T20 Mumbai League, beating Shivaji Park Lions by three runs in an absolute thriller of a final. Chasing 183 for a win, Lions had got down the equation down to 26 runs required off the final over. And despite Shivam Dube smashing three sixes and one four, Shashank Singh held his nerve to lead his team to a narrow win. Alpesh Ramjani (48 runs off 38 balls), Hardik Tamore (39 runs off 31 balls) and Dube (33 not out off 12 balls) got Lions agonizingly close to the target but their efforts were just not enough in the end.

It was the medium pacers that did the job for Knights. Vaibhav Singh finished with figures of 3-38, while Attarwala s figures of 2-23 were equally impressive.

Lions got off to a poor start, losing opener Paul Valthaty early. But skipper Bravish Shetty continued his terrific form in the tournament with some glorious fours. Shetty s 17-ball 32 gave Lions some momentum, but his departure followed a dull period for the chasing side.

The pair of Ramjani and Tamore managed to get just one four in the four overs that followed the Power-play overs. Ramjani managed to reduce the pressure by hitting Valsangkar for a couple of fours. At the other end, Tamore smacked offie Kalpesh Sawant for a couple of sixes. The duo had won the game for Lions on Tuesday, and they seemed to be going the same way with a 82 run stand. That s where Knights skipper Yadav took the gamble of finishing off both his pacers by the 18th over. And the move paid off as Lions lost four wickets for five runs between over No 17 and 18.

With 26 required off the last over, Yadav played another gamble to hand over the ball to Shashank Singh. And the man who hadn t bowled for the past three games was up against an in form Shivam Dube. And although Dube managed to take 22 off the first five, Singh bowled a perfect short ball that Dube failed to connect with completely to send the Knights into a wild celebratory run.

The Blasters innings was split into two halves that were quite opposite to each other. The first one was dominated by the Lions, where the new ball seamed and swung; twice the Knights lost two wickets in two balls. And by the end of the first 10 overs, the Knights had crawled their way to 48 for 5. Siddharth Raut bowled an outstanding 4-2-11-2 spell in the first seven overs. Royston Dias took two wickets from the other end to keep Lions on top.

But what followed was an hour of high quality entertainment from one of the best batsmen in Mumbai. Yadav held himself back till as late as No 7, and still came into bat by seventh over. And the Knights skipper took his time to settle down, and get used to the conditions. He finally decided to take the opposition on in the 12th over, bowled by left-arm spinner Shams Mulani. Yadav smacked three fours in a 16-run over to take the team s run-rate over six. And the last five overs was all about boundaries and sixes. Yadav and Valsangkar hammered 84 runs from the last 30 balls to take Knights past the 180-run mark.

In the process, the duo put on the highest partnership of the tournament 148 runs in 87 balls. Yadav remained unbeaten on 90 from 42 balls (seven fours and seven sixes). Yadav scored 24 of those 90 in the final over of the innings, bowled by Dias.

Valsangkar played an equally crucial knock to finish unbeaten on 59 off 49 balls, with the help of five fours and two sixes.

Man of the Match – Suryakumar Yadav 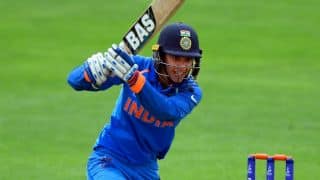 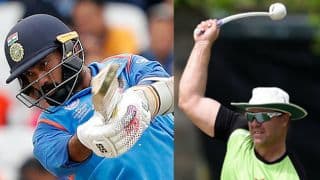