Since his appointment in February 2016, Makhaya has brought a wealth of experience and practical knowledge to ZC.

It is with regret that Zimbabwe Cricket (ZC) announces that Makhaya Ntini, the National Team Bowling Coach, has tendered his resignation from ZC, with immediate effect.

Since his appointment in February 2016, Makhaya has brought a wealth of experience and practical knowledge to ZC, and ZC and its players and coaching staff were fortunate to have had an opportunity to work closely with him during this period, and to learn from his many years of playing for Cricket South Africa at the highest level.

Charismatic, ever-helpful, hard-working and always full of energy, Makhaya s experience and immense knowledge of the game have helped to bolster the ZC national team into a competitive outfit that went on to record Zimbabwe s first ever away one-day international series win over Sri Lanka in 2017.

And while reluctantly accepting his resignation, ZC fully appreciates and respects the reasons behind Makhaya s decision, and wishes him all the very best for the future. 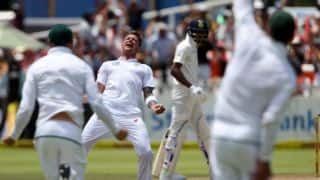