Harare Metropolitan Eagles took a firm grip on their match against Bulawayo Metropolitan Tuskers at Harare Sports Club today, as they ran up a total of 379 and then removed eight of their opponents batsmen for only 94 runs.

Harare Metropolitan Eagles took a firm grip on their match against Bulawayo Metropolitan Tuskers at Harare Sports Club today, as they ran up a total of 379 and then removed eight of their opponents batsmen for only 94 runs. Tino Mutombodzi, with 86, took the main batting honours of the day, while the bowling successes were led by Nathan Waller, who took five wickets in an innings for the first time in his career by means of some excellent medium-fast seam bowling. Play started about 18 minutes early on the second morning to make up for time lost to the rain on the previous evening. Logan Cup 2016-17: Mutombodzi s half-century puts Eagles in driving seat

No run was scored or attempted for 17 balls, as the overnight batsmen Mutombodzi (on 45) and Waller (3) played very defensively, until Mutombodzi finally pushed a ball into the covers and they took a quick single. Gradually the batsmen began to open up, and Mutombodzi reached 50 off 84 balls when he drove a ball from John Nyumbu high over the field to the extra-cover boundary. For a long time Waller played a good supporting r le, and was just beginning to look in form when he miscued a pull off Chris Mpofu and skied a catch to midwicket for 16; 286 for six.

Trevor Garwe hit the first ball he faced, from Mpofu, for a cracking four through the covers, and then Mutombodzi, looking less confident against the second new ball, edged a ball from Thabo Mboyi, but Richmond Mutumbami, the wicketkeeper, was unable to hold a difficult low chance. Off-drives were Garwe s favourite stroke in his 14 runs, but he played one too many and was caught at mid-off; 314 for seven. Jalat Khan got off the mark with a nonchalant on-drive for six off Nyumbu.

Mutombodzi all this time was playing with care and restraint as he edged closer to his century. However, when he had 86, Luke Jongwe came on to bowl, and Mutombodzi drove his second ball hard into the covers, but Taffy Mupariwa took a good low catch to make the score 344 for eight. Soon after this lunch was taken with the score 344 for eight, Khan on 14 and Tanyaradzwa Munyaradzi on four. After lunch Khan fell for 22, miscuing a pull off the bowling of Jongwe and being caught at midwicket; 362 for nine.

The last pair of Munyaradzi and Taurai Muzarabani briefly enjoyed themselves, both hitting a six, before the latter holed out at deep midwicket off Nyumbu for just that six runs. Munyaradzi was unbeaten with 20, and the total was 379. Nyumbu took four wickets for 101 runs, while Chimhamhiwa had three wickets, Jongwe two and Mpofu one. Two left-handers, Nkosana Mpofu and Mupariwa, opened the Tuskers batting to the bowling of Muzarabani and Garwe. Logan Cup 2016-17: Joylord Gumbie s half-century allows Eagles to get off to steady start

Mupariwa never looked comfortable, and scored just four off 30 balls before Muzarabani had him caught at the wicket at 23 for one. Brian Chari, that brilliant but inconsistent batsman, had one of his bad days on this occasion, adjudged lbw to Muzarabani with a ball that came back sharply from the off; he made six off 13 deliveries. A few minutes later Mutumbami (2) clearly showed his displeasure at being given out caught at the wicket, also off Muzarabani. Tea was taken at this point, with Tuskers in trouble at 35 for three wickets.

Nkosana Mpofu and Mbekezeli Mabuza had to fight back after tea, and it appeared that Mpofu was set to play a long innings, as he tends to do under pressure. He played and missed a few times, but reached 29, and at this point he was surprisingly beaten and comprehensively bowled by a yorker from Waller; 60 for four. Waller next removed Mabuza for 11, as the batsman played at a ball that moved away from him and edged it to first slip, where Sikandar Raza juggled and then held it, reducing the score to 72 for five.

Jongwe, who is not progressing as well as had been expected at present, scored a single off 12 deliveries and then dabbed a ball from Waller into the hands of third slip. Two balls and no runs later, Nyumbu edged the same bowler to the keeper, Regis Chakabva, and the Bulawayo team was facing disaster at 84 for seven. Charles Kunje was still there, battling well, but he now had only three tail-enders to help him, and the light was slowly declining. When he had 23, however, Kunje wafted outside the off stump and edged a catch to first slip, giving Waller his fifth victim; 89 for eight.

It was now doubtful whether Tuskers could even reach a score of 100. Finally, with the score 94 for eight wickets, the umpires decided to take the players off for bad light. Thabo Mboyi was still in with four, a single boundary hit, while Chimhamhiwa had one run off 29 balls. Waller s figures at this stage read five wickets for 29 runs. It was not a fortunate day for the Tuskers, who were not happy with some of the umpiring decisions and then had to play the later part of the innings in deteriorating light, when some of them were obviously groping to sight the ball.

However, some of their batsmen did not show enough determination, and they will need plenty of this quality if they are to emerge from this match with anything but a heavy defeat. 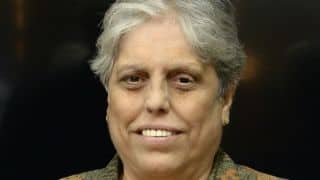 Diana Edulji recused herself from discussion on women's cricket