A century by opener Sophie Devine and some calm heads in the field have helped New Zealand Women to a thrilling one-run win over the West Indies at Bert Sutcliffe Oval in Lincoln.

A century by opener Sophie Devine and some calm heads in the field have helped New Zealand Women to a thrilling one-run win over the West Indies at Bert Sutcliffe Oval in Lincoln. Having been sent into bat in the opening game of the three-match ICC Women s Championship (IWC) series, the host s posted 287-9 from their 50 overs, led by a strong showing from the top order. West Indies captain Stefanie Taylor lead the reply with 90 from 93 balls and the game went down to the last over, with the visitor s requiring 11 runs for victory. Off-spinner Leigh Kasperek was given the ball and held her nerve, conceding just nine runs and picking up a wicket to see New Zealand home in dramatic style.

Earlier, Devine and captain Suzie Bates (44) laid the foundation with a swift 76-run opening partnership. Devine also found support from Amy Satterthwaite (27) and Katey Martin (22) as New Zealand stared down a big total. They were 200-3 after 35 overs when Devine nudged the ball into the on-side for a single to bring up her third ODI century. The Wellington Blaze all-rounder plundered one more six, her tenth boundary of the innings, before she was stumped on 108 from 103 deliveries. Devine s dismissal gave the West Indies confidence as they began to reduce the run-rate and take regular wickets.

The tourists looked to have limited New Zealand to a score of around 250, but Leigh Kasperek (19*) and Holly Huddleston (16*) had other ideas, combining for a 27-run final wicket stand. New Zealand made a strong start with the ball. The West Indies were 31-0 after seven overs when the pace-bowler Huddleston (2-40) came into the attack and struck straight away, removing Hayley Matthews for 18. The home side continued to restrict the run-rate as captain Suzie Bates rotated the bowlers.

Kasperek was next to strike in her second spell, trapping Kycia Knight LBW for 38 to leave the West Indies 88-2 in the 21st over. The West Indies clawed their way back into the match with Taylor and Chedean Nation putting on 64 runs for the third wicket, before Bates produced a sharp bit of work in the field to run-out Nation for 29. Teenage leg-spinner Amelia Kerr then got in on the act with a great caught and bowled to dismiss the dangerous Deandra Dottin, before debutant Lauren Down was summoned into action with an excellent diving catch behind the wicket to dismiss Britney Cooper.

With Taylor at the crease, the West Indies were always in the hunt and she had her team believing they could win at 215-6 in the 43rd over, before she was out for 90 off the bowling of Kate Ebrahim. Kyshona Knight and Merissa Aguilleira then provided some late hitting to take the game to the final over. Kasperek was given the ball and conceded just two runs off the first three balls. A four off the penultimate delivery saw the equation shrink to four runs to win off the final ball, which was lofted down the grounds for two runs, giving New Zealand the tightest of victories. 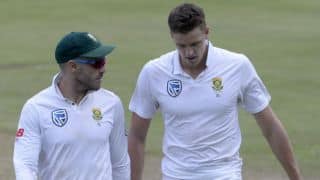 Graeme Smith: Morne Morkel should be given another chance against Australia in 2nd Test South Africa 4 down before lunch on Day 4, need 354 more to win 1st Test vs Australia