Zimbabwe s batting was disappointing, with most of the players succumbing to poor shot selection and failing to make a significant score.

Despite an exciting burst of fast bowling by Brian Vitori, Sri Lanka deservedly cruised to victory by six wickets over Zimbabwe in the Blue Mountain Achilleion Tri-Series final at Queens Sports Club in Bulawayo today. Zimbabwe s batting was disappointing, with most of the players succumbing to poor shot selection and failing to make a significant score. Vitori s bowling, backed by fine fielding, did briefly give Zimbabwe hope as Sri Lanka chased the target, but their strong middle-order batting secured the game and the trophy for them.

The day began with serious concerns about the weather, but after some early drizzle the rain kept away. The sky was gloomy and overcast, with the prospect of rain sooner or later during the day, and the heavy outfield had obviously been affected by the recent rains.

The pitch, however, looked dry and had a fair covering of grass, so it was judged as likely to be good for batting. Zimbabwe won the toss and decided to bat first. They made three changes to their team, bringing in Malcolm Waller, Brian Vitori and Tarisai Musakanda, the last-named deservedly and belatedly making his international d but.

They replaced the two opening batsmen for the series, Brian Chari and Chamu Chibhabha, and Chris Mpofu. Chari and Chibhabha had averaged only 13 and 15 respectively during the first four matches. A drizzle began as the national anthems were being played, and the start was delayed.

The match finally started 20 minutes late, with Hamilton Masakadza and PJ Moor opening the batting for Zimbabwe. Moor scored only a single before chipping an easy catch to midwicket off Suranga Lakmal, and Zimbabwe were eight for one in the fourth over.

Nuwan Kulasekara made a ball swing in to Masakadza, who moved across his stumps, missed it and was trapped lbw for 10; 19 for two after five overs. So Zimbabwe s new opening partnership fared no better than the one they had discarded.

It was unfortunate for Masakadza, as only one more ball was possible, Musakanda scoring a single from it, before rain again hit the ground at 20 for two; however it was only a brief stoppage. Musakanda handled the situation superbly, especially considering his side was in trouble and it was his d but in such an important match. He looked confident and kept the score ticking over from the start, and lost no chance to hit out, although he did have some good fortune in that two or three of his aerial shots just evaded the fielders.

Craig Ervine too settled in well and the fifty partnership came up in less than 10 overs. It came to an end, though, when the leg-spinner Jeffrey Vandersay, playing his first match of the tournament, came on to bowl and Ervine, instead of taking a look at his bowling first, tried to turn his second ball across the line and simply popped it straight back to him for 25; 72 for three in the 16th over.

Musakanda took a risk by hitting Vandersay over long-off for six, just clearing the fielder there, but next ball he pushed forward and was superbly caught low down at slip by Dhananjaya de Silva for 36 off 37 balls, leaving Zimbabwe at 85 for four in the 18th over.

Sikandar Raza did not look secure from the start of his innings, and after scoring five was trapped lbw to the left-arm spinner Sachith Pathirana, missing a sweep against a ball that would have hit his leg stump; 89 for five in the 19th over.

Waller came and went for 14 off 13 balls, trying a big slog against the spin and skying a catch that the bowler could move back to catch; 108 for six in the 23rd over. Graeme Cremer came in next, but he never looked comfortable, although he tried to push the score along, and it came as no surprise when he was out for nine, superbly caught in the covers by Kusal Mendis; 133 for seven in the 30th over.

With overs in hand, he might have been better advised to play a calm supporting game in partnership with Sean Williams, who was batting soundly and waiting for a partner to do just that for him. Donald Tiripano came in, but he too looked rather frenetic, and had a narrow escape from being run out when he had three. Williams was doing a good job until he, like others before him, threw his wicket away with a slog across the line for 35.

This was against the slow-medium bowling of Asela Gunaratne, and he only succeeded in skying a catch into the covers; 155 for eight. Tendai Chisoro (five) failed to repeat his heroics of the previous match, as he nibbled at a ball from Gunaratne outside the off stump and edged the ball to the keeper; 160 for nine in the 37th over.

Vitori survived the hat-trick delivery from Gunaratne, but his eyes lit up as he mistook the next ball for a slow full toss and aimed to play his favourite stroke, a slog far over the midwicket boundary. Unfortunately for him, it was actually a slow yorker, that hit him on the back leg and trapped him plumb lbw, ending a very unworthy batting display for 160 in the 37th over, and leaving Tiripano not out with 10.

Sri Lanka had bowled and fielded very efficiently, playing steadily and waiting for the Zimbabwean batsmen to make mistakes, which they did in a most disappointing way. The slow bowlers Vandersay and Gunaratne picked up three wickets each, and Pathirana two, so the Sri Lankans exploited the batsmen s weaknesses against spin very effectively. The Zimbabwe team no doubt took the field feeling inwardly dispirited, but they were given a huge lift with the first ball of the Sri Lankan innings.

Vitori, returning to the team after a long time out of the side, sent down a fast ball on leg stump that beat de Silva for pace and had him playing across the line, to be struck on the pad and given out lbw.

He referred the decision, but it was upheld another good decision by the Zimbabwean umpire Jerry Matibiri and Sri Lanka had lost their first wicket to the first ball of the innings. The Sri Lankan batsmen were not going to allow this setback to inhibit them, and they batted aggressively against Vitori and Tiripano. Vitori is not yet back to consistent full pace, bowling generally at just over 130 kilometres per hour, and he erred in direction often enough to give Kusal Perera and Niroshan Dickwella frequent scoring opportunities.

Vitori was looking rather harmless overall when suddenly he produced another outstanding delivery that came in to the left-handed Dickwella and uprooted his middle and off stumps as he was bowled through the gate for 16; 29 for two in the fifth over.

Mendis almost immediately slashed a ball between the wicketkeeper and first slip, a chance that both were slow to attempt, and it went to the boundary. A fine square drive for four followed, and Vitori s first three overs cost 23 runs for two wickets.

He struck again with the first ball of his next over, as Perera (14) went for a big hit, as so many Zimbabwean batsmen had done, and with similar result, as he skied a catch off the leading edge; 42 for three in the seventh over. Vitori was now bowling at a pace approaching 140 kilometres per hour, and lunch was taken after this the seventh over, with Sri Lanka 44 for three, Mendis on 10 and Upul Tharanga one.

Unexpectedly Zimbabwe were back in the game with a chance, but unfortunately after lunch the game swung steadily Sri Lanka s way. Tharanga at 17 got a leading edge, lobbing the ball quite high over the bowler Cremer s head, but no fielder was near enough to get close to it.

When Vitori had shot his bolt, Cremer and Williams caused the batsmen some problems, backed by much superb fielding, but they were unable to break through and separate the pair. Mendis, making up for a disappointing Test series and particularly strong on the off side, reached his second successive fifty, which came off 65 balls.

Tharanga became bogged down at times, but Sri Lanka were under no pressure to score quickly and he did not throw his wicket away. After drinks, at 113 for three, Zimbabwe played their final card, bringing Vitori back for a second spell. It was Cremer who finally broke the stand, however, as Mendis was brilliantly caught by Williams on the midwicket boundary, running back and leaping to pull down the ball which appeared to be going for six, all with the sun in his eyes.

Mendis made 57 off 72 balls with 10 fours; 117 for four in the 28th over. Tharanga now decided it was time to open up, which he did steadily, in partnership with Gunaratne, and took the total to 150 with three successive fours off Chisoro, who before then had bowled six overs for 13 runs.

Tharanga reached his fifty off 97 balls with a swing to the leg boundary off Raza, which also levelled the scores, and then drove a straight six to win the match and the tournament. Sri Lanka s final total was 166 for four wickets, with Tharanga unbeaten on 57 and Gunaratne on 16. Rather surprisingly, Sri Lanka took six more balls to reach their target than Zimbabwe took to set it, but they knew they had plenty of time to score the runs.

Vitori was the most successful bowler, but he was also expensive, taking three wickets for 52 off his nine overs. For a while he shook the Sri Lankan top order, but none of the other bowlers could threaten the Sri Lankans when the team had such a small total to defend.

Most of all it was a story of poor batting that let Zimbabwe down, but there was hope for the future in Musakanda, who on his international d but made the top score of 36 batting at number three, and was one of the few who got out to a good ball rather than throwing his wicket away. The bowling of Vitori, almost back to his best bowling form and with his action now cleared, also gave hope that in future Zimbabwe will have more firepower with the new ball. 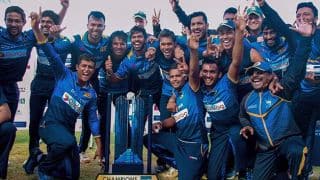 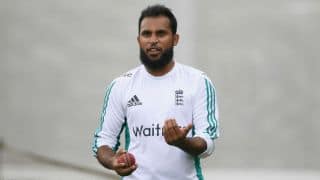