The eight Ambassadors between them have played 1,774 One-Day Internationals, scoring 51,906 runs with 48 centuries, and taking 838 wickets

The eight Ambassadors between them have played 1,774 One-Day Internationals, scoring 51,906 runs with 48 centuries, and taking 838 wickets

The International Cricket Council (ICC) today announced eight stalwarts of the modern era as Champion Ambassadors for this summer s ICC Champions Trophy which will be staged at three iconic venues of England and Wales from 1-18 June.

Shahid Afridi of Pakistan, Bangladesh s Habibul Bashar, Ian Bell of England, Shane Bond of New Zealand, Australia s Mike Hussey, India s Harbhajan Singh, Kumar Sangakkara of Sri Lanka and Graeme Smith of South Africa were unveiled as the Ambassadors with exactly 50 days to go before the first ball is bowled in the tournament opener between England and Bangladesh at The Oval.

The eight Ambassadors between them have played 1,774 One-Day Internationals, scoring 51,906 runs with 48 centuries, and taking 838 wickets.

The Champion Ambassadors will be involved in the ICC Champions Trophy Nissan Trophy Tour and will also make appearances in the UK as part of an inspiring programme aimed at providing school children with an opportunity to meet and play with a legend at the Cricket For Good coaching clinics.

In addition to this, the eight cricketers will be part of a strong ICC editorial team and will provide match previews and match analysis through exclusive columns which will be available on the ICC website at www.icc-cricket.com for free download and editorial use.

ICC Chief Executive David Richardson said: With 50 days to go to the Champions Trophy, we are delighted to announce these eight outstanding cricketers as our Champion Ambassadors. The programme will connect these greats of the game with a new generation of fans and players through our Cricket For Good project and leave a real lasting legacy for the sport.

The team will also bring great insight and expertise to fans via the ICC website and I m sure we will all enjoy reading their analysis and opinions on 15 games during the Champions Trophy.

Commenting on his appointment, Shahid Afridi, who scored 167 runs and took 14 wickets in 13 ICC Champions Trophy matches, said: I feel humbled to have been appointed as an Ambassador for the ICC Champions Trophy. And to be part of a select group of some of the most respected and accomplished cricketers against whom I enjoyed playing international cricket is an icing on the cake. Three more Ambassadors and we would have made a tournament-winning side.

The ICC Champions Trophy is a tournament Pakistan has never won. It is in a tough group alongside India, South Africa and Sri Lanka, but instead of being overawed by the sides ranked above it, Pakistan should keep faith in its abilities and try to enjoy every time they take the field. There are no short-cuts to success and this group of cricketers will have to go through the same process like its predecessors or any other best performing side.

Habibul Bashar, who captained Bangladesh in the ICC Champions Trophy 2006, said: It s a matter of great pride for me to be appointed as one of the Ambassadors for this year s ICC Champions Trophy. Not many things can give you more satisfaction than promoting an ICC event, that too one in which the top eight sides will be fighting for top honours. I eagerly await my role and also look forward to penning my thoughts, which I feel is a great opportunity for me.

It s more than a decade since Bangladesh played in this tournament and I m really looking forward to the event because Bangladesh is now a side that can beat top teams on a regular basis. The nice blend of youth and experience makes it a very balanced side.

The expectations from fans back home has been on the increase for some years now and I m confident the side will justify the faith shown in its players. I feel this is really the time for Bangladesh to shine on the big stage, and nothing better than the ICC Champions Trophy to do it, what with the ICC Cricket World Cup only two years away!

Judging by the players due to be on show, the Champions Trophy is no doubt going to be a stunning competition and I m certain the amazing fans over here will get behind it like they always do with sport in this country.

I m looking forward to writing some columns and giving my thoughts throughout the tournament and also getting to as much as cricket as I can!

Shane Bond, who took four for 21 v Bangladesh in 2002, three for 34 v Pakistan in 2006 and three for 21 v England in 2009, said: It’s an honour to be invited to the ICC Champions Trophy as the New Zealand Ambassador. ICC tournaments are always exciting and the opportunity to attend in a new capacity is one I’m excited about.

Hopefully, New Zealand can continue to perform well in ICC tournaments and I’m this tournament in the United Kingdom will be just as exciting as the 2013 version and a great precursor to the next World Cup.

Mike Hussey, who was a member of the Australia side which won the 2006 and 2009 events in India and South Africa respectively, said: The ICC Champions Trophy is a premier event that I always look forward to given the quality of cricket one expects to see. This time the excitement is two-fold given I have the honour of being an Ambassador for the tournament.

To be representing Australia as an Ambassador for the ICC Champions Trophy 2017 is a huge honour, simply because our country has produced so many top-class cricketers. That I m representing Australia and also getting to share my thoughts and analyses on the ICC website before and during the tournament, makes this Tournament very special.

I m sure the tournament will see some exciting matches from some very talented teams. Any team is capable of winning but I expect Australia will come up with its typical aggressive brand of play to win some of the bigger matches.

Harbhajan Singh, who was a member of the India side which shared the 2002 trophy with Sri Lanka in Colombo, said: To be appointed as an Ambassador for a global event in which India will be the defending champion is one of the highs for me as a cricketer and something to be really proud of.

I look forward to playing my role to promote and publicise this thrilling and exciting ICC event, and will also closely follow India s performance. I am confident that team india will achieve greater heights and am sure that millions of fans back home will be following the side s fortunes.

Kumar Sangakkara, who played in five ICC Champions Trophy events from 2002 to 2013, said: It is an honour for me to be appointed by the game s governing body as one of its Ambassadors and I am grateful for the opportunity. It provides me with a chance to work closely with one of the events I have enjoyed participating in and look forward to playing my part in its success.

Sri Lanka is a young and exciting team in transition and I am confident that it will make great use of this tournament as a stepping stone for the ICC Cricket World Cup 2019 to be held in the same conditions two years from now.

Graeme Smith, who captained South Africa in the 2004, 2006 and 2009 events, said: I am very pleased to be appointed as an Ambassador by the ICC for this summer s ICC Champions Trophy. It s a huge honour and brings back a lot of fond memories for me. The heat of battle at the ICC tournaments I experienced was intense but always great fun. I am sure the Champions Trophy coming up this summer in the UK will be no different.

I look forward to writing a few columns as well, where I ll discuss the key moments and match ups of the summer, plus a lot more. Bring on the Champions Trophy! 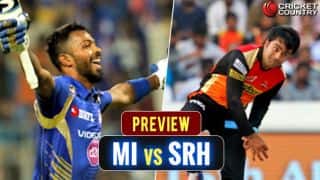 VIDEO: Mumbai Indians (MI) groove to the beats of “Tonight’s gonna be a good night”