New Zealand Cricket official statistician Francis Payne notes that it is the first time in the long history of the competition that the feat has occurred twice in one day.

Hat-tricks in First-Class cricket are not commonplace at the best of times, but on Friday in New Zealand‘s Plunket Shield two fell within the same hour, at opposite ends of the country. Both bowlers went to the same school – Christchurch’s St Andrew’s College, and both are former Canterbury representatives now representing the Wellington Firebirds (Logan van Beek) and Auckland Aces (Matt McEwan).

New Zealand Cricket official statistician Francis Payne notes that it is the first time in the long history of the competition the Plunket Shield was first contested in 1906/07 that the feat has occurred twice in one day, let alone within minutes of each other. Wellington Firebird Logan van Beek claimed the first hat-trick in the fast-moving game at Christchurch’s Hagley Oval, on the way to a match-winning five-wicket bag against his former side, Canterbury. The Firebirds won the four-day match by 10 wickets inside two days.

Van Beek moved the ball off the seam to bowl Canterbury opener Chad Bowes, then enticed an edge from Michael Pollard who was caught for a golden duck at the end of that fourth over. Van Beek claimed Ken McClure as his hat-trick victim with his first ball of the sixth over and finished with figures of 5-33 as the Firebirds rolled Canterbury for 53 in their second innings, in just 18.4 overs. It was Canterbury’s 16th lowest tally in the Plunket Shield and its lowest in the competition since 1992/93.

Shortly before lunch, McEwan claimed Northern Districts’ Dean Brownlie who was caught behind off the final ball of his eighth over, in his first spell in the innings; then added two further big wickets with BJ Watling (caught) and Daryl Mitchell (caught behind) in the first two balls of his ninth over to take an ebullient McEwan to figures of 3-17, both the latter batsmen departing for golden ducks. Districts went to lunch at 95 for 5.

Van Beek’s was the 40th and McEwan’s the 41st hat-trick in New Zealand’s first-class history. Remarkably Central Stags paceman Blair Tickner also claimed a first-class hat-trick this season, against the Wellington Firebirds at Saxton Oval in Nelson. It is only the second instance of three Plunket Shield hat-tricks occurring in one summer.

The Central Stags’ match against the Otago Volts in Napier was the only match today in which a hat-trick did not occur, although Neil Wagner did console himself with a five-wicket bag for the Volts, following Seth Rance’s five-wicket bag on day one for the hosts. 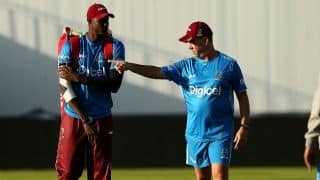