Pressure is on India: Tim Nielsen

Pressure is on India: Tim Nielsen Australian captain Ricky Ponting (L) speaks to coach Tim Nielsen during a training session at the R.Premadasa Stadium in Colombo, on March 18. Nielsen believes silencing the 48,000-strong crowd in Thursday’s World Cup clash against India could open the semi-final door for the defending champions.

India will start favourites for the quarter-final showdown, but Nielsen believes the pressure of playing at home, in front of demanding fans and media, could push Mahendra Singh Dhoni’s men to breaking point.

“Playing at home is a huge factor for them. There’s some pressure there and if we can start the game well and maybe quieten the crowd that will play on the mind of the Indian team,” Nielsen told reporters.

“The media and the public scrutiny will also be so great that you’d expect India to have most of the pressure on them. They will be answering all the questions; there’ll be questions about the surface we play on, there’ll be questions about their line-up. “It would be nice to think we can sneak under the radar a bit and just go about our preparation over the next few days and be as ready to go as we can be,” he added.

Australia saw their 34-match unbeaten streak at the World Cup ended by a resurgent Pakistan in Colombo on Saturday, a result which meant they finished third in their qualifying group behind Shahid Afridi’s side and Sri Lanka.

Nielsen believes Thursday’s game would have made an ideal finale to the tournament. “The adrenaline will certainly be flowing and playing in front of their home crowd in Ahmedabad will be exciting and a challenge for us,” he said.

“We’ve got no fear now; we know we’re in the knockout stage. It’s exciting – a mini-grand final in itself.  If you came here and thought, ‘What would be the best result? It would be great to make the final against India’. Well, we’ve got our final against India in the next few days. I’m sure if we’re on our game, they won’t necessarily be looking forward to playing against us. That’s something in our favour.”

Australia will go into the match having won nine of the last 15 one-dayers played between the two teams in India. They also have an impressive record against India in World Cup matches, having beaten them in seven of nine meetings. 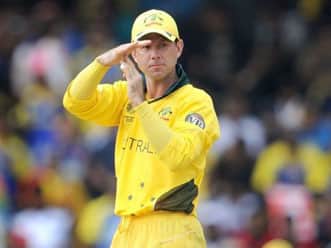 Ponting could be dumped as captain