Preview: Ashwin in contention to play against Ireland

Preview: Ashwin in contention to play against Ireland

The tie against England would have hurt the Indians more than it did to the opponents. On more occasions than not, the team would have been expected to win it after getting to 338, but all the side got was a point. Poor bowling has been blamed as the cause of the dropping of the points. 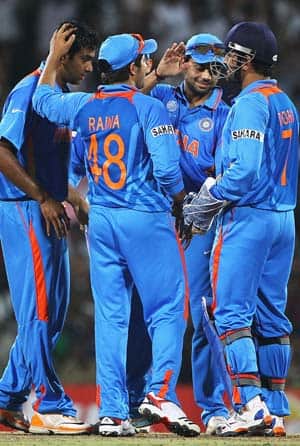 Indian players celebrate a wicket during their warm-up game against New Zealand.

The tie against England would have hurt the Indians more than it did to the opponents. On more occasions than not, the team would have been expected to win it after getting to 338, but all the side got was a point. Poor bowling has been blamed as the cause of the dropping of the points.

There cannot be two ways about that fact. The Indian bowling has struggled in both the games they have played in the competition and coming from the team that did extremely well in South Africa with the ball, it is a surprise. To put it mildly, the way in which the Indian bowling leaked runs in the first 42 overs against England was one performance they would like to forget in a hurry.

That said, the Bangalore wicket, where the game was played was one that they would like to look at closely as well. With the ball coming on to the bat as nicely as it was in the second halves of both the games, India-England and England-Ireland, and with the Indian batting being as strong as it is, it wouldn t make too much sense to bat first on winning the toss.

There have been reports of there being a toss-up between R Ashwin and Piyush Chawla, but if Ashish Nehra is fit, it may not be such a bad idea to get in a third seam bowler.

What Kevin O Brien did to England was a freak show. Expecting bludgeoning players like O Brien to repeat such shows would probably tantamount to a miracle. Even in the first game against Bangladesh, he had a 40-ball 37 to his name, second only to his brother Niall, who made 38. In short, over-reliance on the younger of the O Brien brothers could prove fatal to the team.

This is a good game for the likes of captain William Porterfield and Ed Joyce who had begun to show some form in the England game to not only get starts but also go on to get a big one. In fact, it would be safe to say that in terms of cricketing history, this is one of the biggest games for Ireland a win here could be one huge step towards the second round qualification. Not too many would have accorded that to the Irish given the drastically different nature of the pitches in the country.

That said, the game will be played at the M Chinnaswamy in Bangalore, where both teams have had the experience of playing one match apiece. The track is as flat as they come, probably too flat according to experts and the batting may be easy.

The one factor that the sides may want to look at before deciding on not only what to do at the toss but also gauge the target to set, is that this will be the third game at the same venue in a span of a week. The side-effects could be visible for this third game.

If one looks at the team positions, the side winning this game would make things easy for themselves to get to the quarter-finals. On the contrary, the losing team will probably be left with a scenario of winning two of their remaining three to get through to the next round. India will be favourites to notch their second win, but as banana-skins go, they will not find a bigger one in this World Cup.