Preview: Buoyant India look to secure the series in Mohali

Preview: Buoyant India look to secure the series in Mohali

Riding high on confidence gained from back-to back victories, a rejuvenated India will be eyeing to clinch the five-match series against a demoralized England in the third cricket one-dayer here on Thursday. 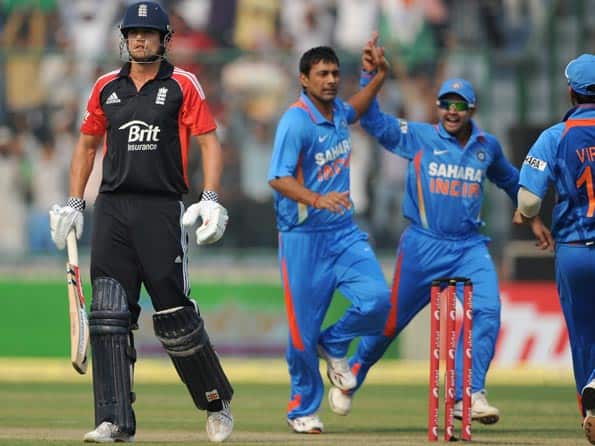 Riding high on confidence gained from back-to back victories, a rejuvenated India will be eyeing to clinch the five-match series against a demoralized England in the third cricket one-dayer here on Thursday.

An unassailable 3-0 lead will not only act as a sweet revenge for the hosts but also redeem their pride which took a beating after their ‘whitewash’ during the English summer.

Billed as the “payback series”, Mahendra Singh Dhoni and his men defeated England with consumate ease in the first two ODIs played in Hyderabad and Delhi.

While India thrashed England by 126 runs in the series opener in Hyderabad, the Men in Blue scored an equally emphatic eight-wicket win in the second ODI in New Delhi on Monday.

And the young Indian outfit will be keen on maintaining their supremacy over England, who have vastly improved as an ODI team.

Going into tomorrow’s day-night encounter, the Indians will also take heart from the fact that they have leapfrogged England to the fourth place in the ICC ODI rankings with the 2-0 lead, and one more win will only further consolidate their position.

But come what may, the third ODI promises to be yet another engrossing encounter on a pitch which promises to be a belter with the fast bowlers getting more purchase from it than the spinners.

With a host of seniors, including Sachin Tendulkar, Virender Sehwag and Zaheer Khan missing the series due to injuries, it was left up to the young brigade to shoulder the responsibility of the team in the first two matches and they did not disappoint, prompting the BCCI to name an unchanged squad for the remaining three games of the series.

Out-of-form Harbhajan Singh has once again been ignored, which means the inexperienced Indian bowling attack will continue to be led by Praveen Kumar.

In spite of huge pressure, the untested Indian pace attack impressed all and sundry with their performance so far.

While Praveen has been accurate upfront, young Umesh Yadav impressed with his pace and wicket-taking abilities even though he conceded a few runs.

R Vinay Kumar provided the perfect support in the middle overs and played a key role in India’s win in Delhi with a four-wicket haul.

And the trio would be itching to bowl at the Mohali track, which is known for its pace and bounce.

To add to India’s liking, the spin duo of R Ashwin and Ravindra Jadeja, who scalped four wickets apiece in the series so far, did not let the team feel Harbhajan’s absence.

Jadeja’s presence in the team as an all-rounder has also provided balance to the team and has given Dhoni the luxury of an additional bowler.

But what has been most encouraging for India has been the performance of its batting department.

Barring openers Parthiv Patel and Ajinkya Rahane, all other Indian batsmen got runs in the first two matches.

While captain Dhoni’s blistering knock was the heartening feature of India’s batting in Hyderabad, it was young Virat Kohli and Gautam Gambhir who stole the show in Delhi.

For India, the only chink in the armour has been the performance of its opening duo ? Patel and Rahane even though it is highly unlikely that the Indian skipper will tinker with the winning combination.

On the other hand, the England side will be under immense pressure not having excelled in sub-continental conditions where the balls tending to keep low.

For the visitors, tomorrow’s match is a do-or-die affair as they cannot afford to lose another match in the series.

England have faltered in all departments of the game so far in the series and it’s high time that they get their acts together to keep the series alive.

This English team is a pale shadow of the one which demolished India at home in this summer but has shown a lot of character in the recent past and is capable of bouncing back anytime in the series.

What has been surprising is England batsmen’s inability to bat 50 overs in the first two matches.

It is not that England don’t possess firepower in their bating department but they have lost wickets at regular intervals in both the games.

With the likes of captain Alastair Cook, Craig Kieswetter, Jonathan Trott, Kevin Pietersen and Ravi Bopara in their ranks, the tourists have a formidable batting line which only needs to click as a unit.

But what has been surprising is that England have left out a solid batsman in Ian Bell from the playing XI in the first two ODIs and going by indications Bell’s inclusion in the team for tomorrow’s match is almost certain.

England’s bowling too has been ordinary in the series so far. Pace trio of Steven Finn, Jade Dernbach and Tim Bresnan have failed to trouble the Indian batsmen up front which makes it quite clear that the visitors are missing their two leading bowlers ? James Anderson and Stuart Broad’s experience in the Indian conditions.

The spin duo of Graeme Swann and Samit Patel also failed to utilize the Indian conditions and proved to be bread and butter for the Indian batsmen in the two games.

With the dew likely to play a role in evening, the team which wins the toss might just opt to bowl first and try to take the initial advantage of the Mohali wicket. (PTI)