Preview: Buoyant India will be wary of Sri Lanka in fourth ODI at Adelaide

Preview: Buoyant India will be wary of Sri Lanka in fourth ODI at Adelaide

A rejuvenated Indian side will aim to complete a hat-trick of victories when they take on Sri Lanka in the fourth match of the Commonwealth Bank Tri-Series. 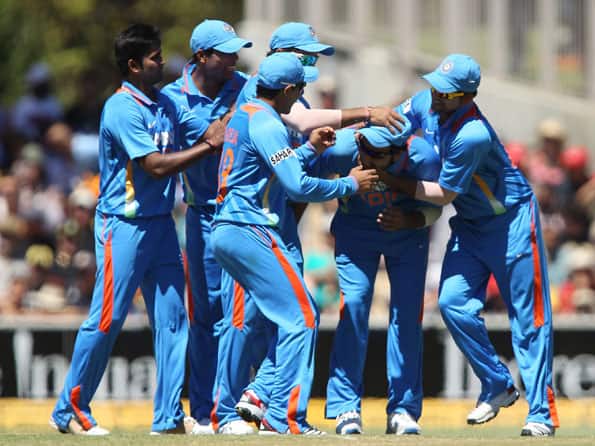 A rejuvenated Indian side will aim to complete a hat-trick of victories when they take on Sri Lanka in the fourth match of the Commonwealth Bank Tri-Series.

Mahendra Singh Dhoni’s men have got a shot in the arm after beating Sri Lanka and Australia in successive matches and their much in debate rotation policy has till now worked.

Not often that one finds Sachin Tendulkar being rested despite being fit and available but the positive aspect is the number of options available for the Indian team with talented players like Praveen Kumar and Rahul Sharma raring to go.

However Sri Lankan side won’t be mere pushovers even though haven’t been able to register a single victory.

Twice in Perth, they had India and Australia on the ropes and just couldn’t finish off the match. They allowed India to escape from 181 for six in the first match and needed only a hit to prevail over Australia.

It’s a fair bet that the old firm of Kumar Sangakkara and Mahela Jayawardene, Sri Lanka’s best in batting could come good on the batting-friendly track of Adelaide Oval.

Both have been relative failures in the first two matches but both have given glimpses of their sublime touch and assuredness. If the two are able to spend quality time in the middle, and Tillakaratne Dilshan is able to convert his blazing start, Lankans have enough all-rounders to post a sizeable total on the board.

Sri Lanka are unlikely to make a lot of change to their playing XI although they could look at the all-round ability of Thisara Perera at the cost of Dhamika Prasad, but it’s unlikely they would pull out Sachithra Senanayeke since the off-spinner could find the bounce of Adelaide Oval to his liking.

It could also turn out to be a battle of wits between captains Jayawardene and Dhoni. The Sri Lankan skipper is more of a gambler, attacking all the time and never taking his foot off the pedal even when the rival batsmen are on the go. He choked Australia the other night and could very well do the same against India tomorrow.

Dhoni, on the other hand, prefers packing one side of the wicket with fielders and demanding a consistent line from his bowlers. He is rarely a captain who seizes a match by the throat or go for the jugular.

In all the three matches so far, Indians have chased a total. In Melbourne, it cost them dear in a rain-curtailed match but in the next two games, it’s been a happy ending.

It’s fair to say that the batting is now shaping up nicely and could only get better from now on.

Ranganath Vinay Kumar has been the unsung hero of this Indian team. Bengalore medium pacer has accounted for six victims in three matches at 22.50 average and an economy rate of only 5 runs per over.

He has invariably given India the breakthrough and is now an integral part of the playing XI.

If the rotation policy is kept in place, it could be Virender Sehwag cooling his heels in tomorrow’s game.

Tendulkar is due to return and it could well be the day when the great man finally meets his long-pending milestone of 100th international century.

It could be fitting too if Tendulkar reaches the coveted landmark in Sir Don Bradman’s hometown.

Thus Tendulkar could be opening with Gambhir, the latter fresh from his exploits against Australia, on Sunday. The left-hander looked extremely assured during his 92 against Australia and could be looking for a repeat act tomorrow.

The middle-order too is beginning to bloom well. Virat Kohli, despite his relative failure, looks in sublime touch.

Rohit Sharma and Suresh Raina, the two relative failures in the first two games, picked up their paces in the last match.

Dhoni too found his bearing and lived up to his reputation as a dangerous floater in the lower half.

The match is likely to be a high-scoring affair and it wouldn’t surprise anyone if the skipper winning the toss, opts to field first and bank on batsmen to chase through any target which is set for them. (PTI)