For any other team, it would have helped to play a home game after having lost two games in a row. For the Deccan Chargers, one cannot be sure about that possibility. Deccan search for first win against Bangalore under Kumar Sangakkara

For any other team, it would have helped to play a home game after having lost two games in a row. For the Deccan Chargers, one cannot be sure about that possibility. One, they have never won at home in Rajiv Gandhi Stadium in Hyderabad, and secondly, while the ‘home’ bit in the home crowd remains true, the crowds were conspicuous by their absence in their first match here.

The Royal Challengers Bangalore, in another way, would be happy. Especially if the pitch for this game continues to remain as what it was in the previous game here – it had bounce and there was a tinge of green that helped even the medium-pacers.

Bangalore have Daniel Vettori, their captain, leading them in the spin department as well but on the whole, their predilection seems to be that for pace. Zaheer Khan leads the attack, and while Dirk Nannes is injured, there is an amply suited replacement in Charl Langeveldt waiting in the ranks.

On the other hand, the Chargers have a good balance of pace and spin, but while someone like Dale Steyn can still extract much from his ability to swing in the air on a spin-friendly track, the pair of Amit Mishra and Pragyan Ojha will prefer a spin-friendly pitch.

This isn’t the crux of the issue for the Chargers, who have yet to register a win. Their batting definitely is. In both games, one while setting a target against the Royals and the other while chasing in the Kolkata game, the batting has failed to step up, a fact that captain Kumar Sangakkara alluded to in the press conference as well.

There is much dependence on Sangakkara the batsman, himself, even as one feels that JP Duminy needs to step up to the plate – probably even at higher than his normal number five position. This way, Duminy gets a chance to build the innings and then, with Dan Christian down the order possessing the capability to go after the bowling, things could show some improvement.

The two games that Bangalore have featured in have shown their bowling to be of concern. In the absence of the likes of Steyn, Kumble and back-up in Vinay Kumar – all given up by the Bangalore think-tank this auction – the bowling has looked a tad feeble. Much like Sangakkara’s shoulders being barraged by the batting responsibility, Zaheer has a lot on his plate as the bowler. He needs someone from the other end to release that pressure.

Tillakaratne Dilshan struggled to his 50 in the previous game while AB de Villiers’ acceleration came a bit too late. At least one these two, along with Virat Kohli – whose knock was unlike his fluent self – will need to pile up the runs for the Royal Challengers. 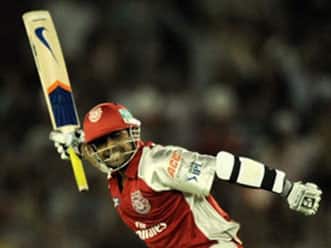