Their egos battered after the debacle against arch-foes Pakistan, India hardly have any time to reflect and plug the loopholes but an inexperienced England attack gives the hosts a slight edge in the five-match ODI series starting at Rajkot on Friday. 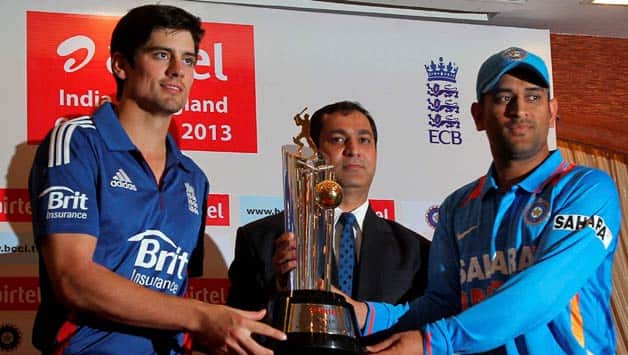 Their egos battered after the debacle against arch-foes Pakistan, India hardly have any time to reflect and plug the loopholes but an inexperienced England attack gives the hosts a slight edge in the five-match ODI series starting at Rajkot on Friday.

The 1-2 loss to Pakistan had exposed chinks in the Indian batting armour, forcing the selectors to omit off-colour opener Virender Sehwag and replace him with in-form local hero Cheteshwar Pujara in the squad to take on England in the first three games.

The consolation victory over Pakistan in a low-scoring thriller in the final game in bitterly cold conditions was a desperately-needed shot in the arm for the Mahendra Singh Dhoni‘s men ahead of the rubber against England, which earlier whipped the hosts 2-1 in the four-game Test series.

England will again be led by their victorious Test skipper Alastair Cook but their bowling attack, without the presence of several key Test bowlers, appears inexperienced and could be just the tonic needed by the bruised Indian batting line-up to get back into the groove.

Barring Dhoni, who scored a ton and a half ton in totalling 203 runs in the three games against Pakistan, it was a collective batting failure by the Indian top-order in which Suresh Raina, with a modest tally of 92 runs with 43 as his best score, emerged as the second-best batsman.

Opener Gautam Gambhir, who escaped the axe in the aftermath of the series defeat, his Delhi teammate Virat Kohli and Yuvraj Singh were flops against Pakistan whose pace attack severely dented their confidence.

But against the less-experienced England pace attack, led by Tim Bresnan and Steven Finn, the same set of batsmen ought to flourish, especially on what promises to be a batting-friendly playing surface.

The old ground in this city, the Madhavrao Scindia race course ground, was known for its placid tracks and in the last ODI game played here in 2008, the England pace attack was hit all over the park by Gambhir, Sehwag and Yuvraj, who cracked a 78-ball 138 with 6 sixes and 16 fours in it.

That attack comprised of James Anderson, India’s nemesis in Tests who is absent from the ODI series, Stuart Broad, available only for the last two games of the current rubber, and the retired duo of Andrew Flintoff and Steve Harmison.

The current new-ball attack comprising Bresnan, Finn, Stuart Meaker and Jade Dernbach does not appear as lethal as the one that was smashed to smithereens by the Indian batsmen four years ago.

“It will be good to see the Indian batsmen getting some confidence back (after their poor display against Pakistan bowlers) and the track will suit the batsmen. Scores in excess of 300 are expected,” said a top official of the Saurashtra Cricket Association about the pitch at the newly built SCA Stadium.

It remains to be seen whether Pujara, who goes into the game with a triple century for Saurashtra in the Ranji Trophy quarterfinal game against Karnataka, would be fitted into the eleven.

The England attack, which is yet to come to grips about the changed ODI rules vis-a-vis field restrictions, has come under criticism in its media following the two straight losses the team suffered in the warm-up games in Delhi against India A and Delhi and may find the track here devoid of any substantial help.

Off-spinner James Tredwell has emerged with some success in these games and England would look to him to make inroads in the middle overs at this ground where tall scores have been common in past Ranji Trophy games before it was officially inaugurated last Sunday.

In batting, England will depend a lot on Cook, Ian Bell, who seems to have taken a liking at last to Indian tracks by scoring a ton and a 91 in the two warm-up games, Kevin Pietersen and Eoin Morgan.

In wicketkeeper Craig Kieswetter and Joseph Butler, England have two other batsmen capable of taking the aerial route and get quick runs.

India’s young pace bowling attack of Shami Ahmed and Bhuvneshwar Kumar would be tested severely on this track after the bowler-friendly conditions they had played in against Pakistan. The more experienced Ishant Sharma needs to show the way.

Spin would be in the hands of Ravichandran Ashwin, whose form has been up and down, and Ravindra Jadeja, along with Yuvraj Singh, who has the knack of getting among the wickets against Englishmen.

The noon start for the game would also negate the effect of dew fall later in the day to a large extent.

The series provides a chance for India to redeem its prestige, while England can cement their place on the top of one-day rankings by winning. India also have the chance to shoot to the top of the order again if they can make a 5-0 clean sweep like they did in 2008.

For England, like it was the case in the Test rubber, a series triumph would result in re-writing history after nearly three decades.

England currently lead second-ranked South Africa by a fraction of a point, but will take an outright lead on the championship table if they win the series against India, irrespective of the results of the South Africa-New Zealand and Australia-Sri Lanka series.