The series may be in their grasp, but India are unlikely to take their feet off the pedal when they take on a hapless England in the fourth ODI to push for a whitewash in the five-match ODI series on Sunday. 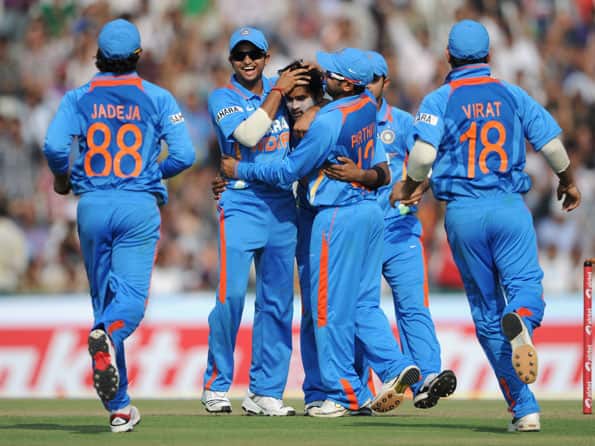 The series may be in their grasp, but India are unlikely to take their feet off the pedal when they take on a hapless England in the fourth ODI to push for a whitewash in the five-match ODI series on Sunday.

Having outplayed England in the first three encounters, Mahendra Singh Dhoni and his men have returned to the scene of India’s greatest triumph just over six months after sending the billon-strong nation to delirium by clinching cricket’s biggest prize — the World Cup — under lights at this revamped arena.

Memories of that glorious April 2 night and the wild celebrations that followed might be distant for Dhoni especially after his squad was swamped by England at home in all three formats soon after that historic triumph.

The 3-0 unassailable lead going into the penultimate clash on a wicket that is expected to be a slow turner may not be redemption, but it must have assuaged some bad feelings the Indian captain might have carried since his return home from the disastrous tour of England.

What should be more pleasing to him and coach Duncan Fletcher is that the triumphant run in the current series has been achieved without the presence of several key members of the World Cup-winning squad, indicating the strong bench strength, albeit in home conditions.

But Dhoni knows that a momentary easing of the pressure applied by his men on England could be counter-productive. He would be keen to keep the winning momentum going to stay in the hunt for a memorable clean sweep, with the last game being scheduled at Kolkata on October 25.

Team India has done everything right thus far and taken the insurmountable lead with the same eleven players turning out in the first three matches and the batting order too remaining constant.

The home team has batted well, both while chasing the target or setting one, with skipper Dhoni himself taking up the challenge when the innings had gone into a slight wobble on occasions.

Among the most pleasing aspects of the five-wicket victory in Mohali was the form shown by young opener Ajinkya Rahane — the lone Mumbai representative in the squad in this series, who would be playing his first international encounter in front of his home supporters,

The 20-year-old Rahane, who scored a man-of-the-match winning 91, and the fighting Parthiv Patel laid the platform for the challenging (300 run target) chase with a stand of 79 that helped lay a good platform for Dhoni and Ravindra Jadeja to finish off the match and seal the series triumph.

With Gautam Gambhir also showing good form with a half century, the stiff target was reached with five wickets to spare. Add to this mixture, the explosive potentials of Virat Kohli and Suresh Raina and the batting in ideal conditions looks formidable.

England bowlers have been largely clueless on how to tame the Indian batting line up on shirt-front wickets, unlike in the recent series back home when the shoe was on the other foot. They need to come out with something different if they have to make a match of it here.

To add to their woes, pacer Chris Woakes has picked up an injury without playing a match in the series and has been replaced by Graham Onions in the squad.

India too have lost young Vidarbha pacer Umesh Yadav, who has had a mixed series, following an injury in the previous game at Mohali on October 20.

His replacement, Bangalore-based Abhimanyu Mithun, has played four Tests and a couple of ODIs in his short international career while his rival for the spot vacated by Yadav, has none. It’s a toss-up between him and greenhorn Varun Aaron for the third seamer’s spot.

The largely inexperienced Indian bowling attack has done enough to keep the English batsmen under the cosh. In slightly seam and swing friendly conditions the two Kumars – Praveen and Vinay – have struck early blows.

In conditions aiding some turn, the spin duo of left arm Jadeja and off break bowler R Ashwin have kept the run-scoring down to put the England middle-order under pressure to improve the run-rate.

“Here (in India) the conditions are in our favour. The bowlers are used to the conditions and bowling really well. So it’s a positive sign,” Dhoni commented after the series-clinching victory at Mohali.

Dhoni had also hinted that with the series already in pocket, India might test its bench strength in the next two matches.

England batsmen have gradually improved during the series after a poor show in the first ODI at Hyderabad where they were bundled out for a meager 1734 in 36.1 overs.

They almost touched the 300-run mark after batting for 50 overs at Mohali which must have given them confidence in playing the Indian bowling attack on the slow wickets of low bounce.

But England have to pull up their socks in fielding, a fact conceded by their captain Alastair Cook after a shoddy show in the previous game.

“We made too many mistakes against a world-class side and that’s frustrating,” Cook said.

After scoring 298 for four, England failed to defend the score with India romping home with four balls to spare.

“The score of 300 was decent one. It was defendable but mistakes on the field cost us the match,” Cook said.

The wicket prepared has been described as a slow turner, even slower than what he had prepared for the World Cup final, by curator and former India opener Sudhir Naik. The dew factor may not be as significant as in the northern part at this time of the year.

Ticket sales for the match has not been greatly encouraging though Mumbai Cricket Association officials said they would pick up today and expect a full house on Sunday ahead of the Diwali celebrations next week.

Not much difference between Yusuf and Jadeja: Akram