Ending what has been a nightmarish tour positively is not the only motivation for the Indian team to win the final cricket ODI against England as the side would also want to ensure a fitting farewell to veteran Rahul Dravid, who plays his final one-dayer here tomorrow. 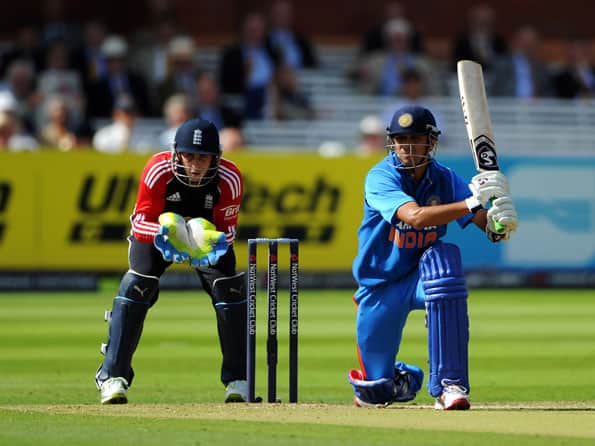 Indian team would want to ensure a fitting farewell to veteran Rahul Dravid, who plays his final one-dayer on Friday Getty Images

Ending what has been a nightmarish tour positively is not the only motivation for the Indian team to win the final cricket ODI against England as the side would also want to ensure a fitting farewell to veteran Rahul Dravid, who plays his final one-dayer here tomorrow.

Dravid, who has amassed 10,820 runs in 343 ODIs at an average of 39, has announced his retirement from one-day cricket after this series and he would be keen to go on a high, more so since the first four games of the series have only yielded 51 runs to him.

The 38-year-old right-hander, nicknamed ‘The Wall’ for his rock solid defence and consistency, has scored 12 hundreds and 82 fifties in the ODIs and he would want to notch up a big knock tomorrow to make his swan song appearance memorable.

Aside from this, the match is of academic interest only as England have already won the series. The hosts are leading 2-0 after one match was rained out and another ended in a tie also due to rain interruptions.

But Mahendra Singh Dhoni’s men would be keen to get at least a consolation win on what has been a massively disappointing series.

Dhoni has a difficult choice to make on the team selection as he can either look for a win or test the mettle of his reserves.

If a solitary win from a horrendous tour is his motivation, it’s unlikely he would give better performers of the side, men like Suresh Raina, Praveen Kumar and even himself a break.

If the choice is to view the men for tomorrow, then medium-pacers Varun Aaron and Vinay Kumar and batsmen such as Manoj Tiwary and Subramaniam Badrinath should be on the starting block.

Despite the series loss, India have run England close in the one-day series which is commendable given eight of their World Cup stars were missing due to injuries.

Openers Parthiv Patel and Ajinkya Rahane have been good against the new ball and Raina and Dhoni himself have been pillars of strength in the middle order.

Off-spinner Ravichandran Ashwin, presently the top wicket-taker from both sides, has been a good presence with both bat and ball and bowling all-rounder Ravindra Jadeja has won the solitary man of the match award among the Indians.

Jadeja was adjudged man of the match in the third one-day international at the Oval last week when he made 78 and picked up two England wickets with his left-arm spin bowling.

Given how injuries have hurt India on this tour, it wouldn’t be a bad idea to blood youngsters and mark their performance for future references.

A win in the final game could only be token and wouldn’t make any material difference in a series already lost.

Some good performances from youngsters would also alert the seniors who would be looking to return in the home series against England next month.

England, ironically, wouldn’t be in the best of spirits even though the series is already won for them.

Two key players, Eoin Morgan and Stuart Broad, have been injured and both would have been invaluable when England pays a return visit to India next month.

Craig Kieswetter and Ben Stokes, two young talents, haven’t covered themselves in glory and clearly there is a case for Kevin Pietersen’s return in England fold next month.

Fast bowler Jade Dernbach, despite the specialist role he plays as a one-day bowler, hasn’t put the skids under the Indian batsmen.

Indeed, despite providing two green pitches in London and having asked India to bat first in both the matches, England were lucky to leave London without losing either of the two matches at the Oval and Lord’s.

England clearly don’t have the flair and the flamboyance of the Indian batsmen and hitting over the top doesn’t come easy to them.

A case in point was the last match at Lord’s where Ian Bell and Ravi Bopara prospered as long as they kept the scoreboard ticking with ones and twos.

The moment Bell and Bopara flexed their arms and went for big hits, they were caught in the deep and England were just about lucky to escape with a tied match.

The pitch here usually helps batters and England would struggle to contain the Indians. As has been the trend in the series, home captain Alastair Cook would once again hope to win the toss and insert the visitors in.(PTI)