Decimated by injuries and hard-done by the weather-gods in the opening one-dayer, a demoralised India would be desperately looking for a win when they take on England in the second match of the ODI series on Tuesday. 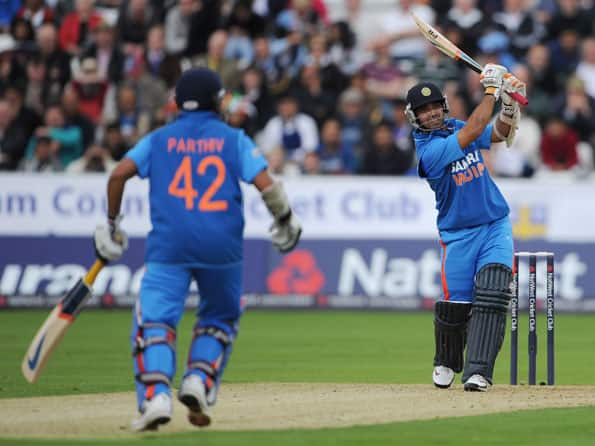 Decimated by injuries and hard-done by the weather-gods in the opening one-dayer, a demoralised India would be desperately looking for a win when they take on England in the second match of the ODI series on Tuesday.

The world champions were in a good position to win the first one-day international on Saturday before rain played spoilsport but there was enough from the game for India to get interested in its bench strength.

But the match also brought fresh injury concerns for India as batsman Rohit Sharma was completely ruled out of the series due to an index finger fracture while Sachin Tendulkar is doubtful due to the flaring up of an old toe problem.

Tendulkar’s toe is said to have improved but not enough for him to take part in Tuesday’s floodlit match at the Rose Bowl. Rohit has been replaced by Manoj Tiwary but he is unlikely to play tomorrow.

On the positive side, openers Parthiv Patel and Ajinkya Rahane caught the eye immediately and made England’s pace battery wait for the first breakthrough longer than they have throughout the summer. Vinay Kumar, in the little he bowled, also showed good control.

India would be looking to add Ravinder Jadeja in the mix in the day-night fixture — a cricketer they expect to contribute his bit in all three departments of the game.

Jadeja is primarily known for his stingy left-arm spin bowling and sharp fielding in the ring. He also showed promise with the bat in the last Indian Premier League (IPL).

Still, he would be a poor man’s Yuvraj Singh in the line-up as his last 10 international matches for India have produced only 87 runs.

In the present scenario, one can’t be too critical of Mahendra Singh Dhoni’s men as most of their top stars are on the injured list

India presently has a dreadful record with injuries as only four of their World Cup winning squad are left standing on their feet — Virat Kohli, Suresh Raina, Mahendra Singh Dhoni and Munaf Patel.

It is thus unreasonable to expect them to strike the winning chord and the tag of being world champions isn’t much of a help.

The key for India will be to bat in the same spirited manner as they did at Chester-Le-Street even though batting in cold conditions, especially if it’s under floodlights, could be a difficult task against the England bowlers.

India clearly have a good pacer in Praveen Kumar in their corner. The right-arm swing bowler is proving a difficult customer for England openers.

Both Alastair Cook and Craig Kieswetter have reasons to fret about him, more so since opening slots have been unsettling for England in recent times.

The hosts have tried as many as 19 pairs in the last 96 one-day internationals but are still anxious on them.

The ideal condition for India would be to bat first in this game.

If they can post a good total, their bowlers could be a handful under lights against England batters, more so since the pitch at Rose Bowl would not be as benign as the one in the first game was.

England would be buoyed by the return of Graeme Swann. The off-spinner, the best bowler in one-day internationals in the world, is said to have recovered from his stomach bug.

Left-arm spinner Samit Patel ought to make way for the senior spinner.

England are also keen to have a look at Ben Stokes at the international level. The young Durham cricketer is said to be a fierce striker of a cricket ball.

He is also a useful fast bowler but a finger injury would prevent him from bowling in the near future.

England are keen to end the summer on a winning note and could put in an improved performance.

They would be hoping the Rose Bowl offers them reasonable swing which was missing at Chester-Le-Street.

The second one-day international, like the first one, has also drawn huge interest among the fans and is already a sold-out affair.(PTI)

BCCI to take up Nasser Hussain issue with ECB